Blog
Petr Baroch, Lawyer at the Organization for Aid to Refugees (OPU)
Share

Regular readers of this blog are no doubt acutely aware of just how vulnerable stateless people can be to human rights abuses. Recently the right to adequate housing, or rather the notion that everyone should have the right to live somewhere in security, peace and dignity, has been at the centre of our statelessness work in the Czech Republic.

If our goal is to gradually achieve respect for fundamental human rights for everyone including stateless people, we must lay the individual bricks on solid foundations. In practice, this means securing adequate housing for all. The term international homelessness, which is used as a synonym for statelessness in the Czech language, unequivocally reveals the central problem facing those who end up without citizenship. These individuals are often at risk of being pushed into homelessness and a life on the streets (see the #StatelessnessINDEX country profile for more information on statelessness law, policy and practice in the Czech Republic).

Within my organization, the Organization for Aid to Refugees (OPU), there was a strong push in recent months to secure the right of all people who have applied for stateless status to access asylum accommodation while their application is being processed and until they are recognized as stateless by the Czech state. This would be on par with asylum seekers, who normally reside in reception and accommodation centres, which are managed by the Refugee Facilities Administration of the Ministry of the Interior.

Viktor (not his real name), lost his citizenship during the breakup of the Soviet Union. He has spent a significant part of his life in the Czech Republic. He speaks the language well and has plenty of social connections. However, even this social capital was not enough to shield him from what was going to happen. The loss of citizenship, combined with the attitudes of both the Czech and Russian states, gradually forced him into street homelessness. One by one, the authorities washed their hands, because Viktor lacked documents. Due to the impact the long-term hardships have had on his health, Viktor has recently been admitted to a hospital. Whether he will ever make it out again is unfortunately not clear. Moreover, this tragic outcome could have been avoided. The Czech authorities had the means to prevent Viktor’s street homelessness, by providing him, at the very least, with a space in one of the asylum accommodation centres.

As a result of the imperfect legal provisions regulating the stateless status application process, the right to housing is not clearly stipulated by Czech law. However, both the Czech Law on Asylum’s explanatory memorandum and the Ombudsman’s official position have included the option of accommodating applicants for stateless status in asylum accommodation centres. The same view was adopted by the courts, who our clients turned to after being denied access to the asylum centres. Despite the rulings, the Ministry of the Interior’s Department for Asylum and Migration Policy has continued to issue strict instructions to all other authorities not to offer housing to stateless individuals, not to grant them work permits, nor to admit them into the healthcare system. Thus, stateless people have spent the cold winter of 2021, made even more bleak by the dismal pandemic situation in the Czech Republic, on the streets. This happened despite the possibility of accessing housing existing in law and having been confirmed by the courts. Sadly, Viktor was not the only stateless person who was left without accommodation.

We can very well ask ourselves what message is a government, which refuses to respect the law or the decision of the courts, sending to its citizens. If the authorities are refusing to help people in desperate situations, even though the law and the courts are expressly requiring them to do so, it becomes necessary to strive for systemic change and boldly call these authorities dysfunctional. The state of a society is best reflected through the treatment of those on the margins; this holds as true today as ever.

I am fully aware of how idealized this notion is, but I have always seen the charity sector as an extended limb of the state bureaucracy; as a flexible arm, able to reach into hidden areas inaccessible to the rigid, over-formalised body of state authorities. Thanks to direct daily contact with those they help through difficult situations, NGOs are able to collect data from the field and communicate their findings to the authorities, who would otherwise remain in the dark. In my ideal world, state structures would reflect this practical experience through amendments to the legislative frameworks guiding the actions of relevant subjects. They would all be part of a whole, involved in constant communication; as a result, state authorities would never forget anyone who is left on the margins of society, while their confidence in the charity sector would be repaid in the form of invaluable feedback on the rules set by the state.

In reality when it comes to migration our dialogue with authorities is rare nor can it be described as constructive. More often than not, we view each other as enemies. In the case of stateless people, the relevant Czech authorities have initially decided to ignore the alarming findings brought forward by the NGO sector, instead leaving stateless people at the mercy of the system, which failed to respect their most basic rights. As a result, they were left without secure housing, carrying deep psychological and physical trauma.

Only now, and after months of concerted advocacy by OPU and other stakeholders has the Refugee Facilities Administration announced a change in practice. This means that applicants for stateless status will finally be offered accommodation. I don’t live in a make-believe world; we cannot expect the mutual distrust between the state and NGOs to end anytime soon. But at the very least on this issue, we can hope that tragic cases like that of Viktor will become increasingly rare, and the fundamental right to adequate housing for all will prevail.

WEBINAR: Deprivation of nationality and the prevention of statelessness

#StatelessnessINDEX Thematic Briefing: Deprivation of nationality and the prevention of statelessness in Europe

Most people regard their nationality as a secure legal status. However, in the recent past, deprivation of nationality has become increasingly…
22 Jul 2021 / Thematic briefing 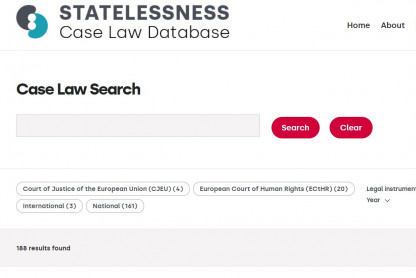