Climbing the ladder of participation with stateless changemakers

In January 2022, ENS began working with The Social Innovation Partnership (TSIP) to co-design a learning programme with a group of ENS members – specifically, changemakers with personal experience of statelessness who are working to champion the rights of stateless people across Europe.  The following blog explores the co-design process and resulting training programme and reflects on co-design good practice more broadly.

Nobody understands the impact of living without a nationality better than stateless people themselves. Yet the experiences of stateless people are rarely acknowledged by decision-makers in the debates and decisions which affect their lives. The European Network on Statelessness (ENS) works alongside stateless people to platform their voices and provide opportunities to deliver their own messages on what needs to change, both to decision-makers and the wider public.

In January 2022, we began co-designing a learning programme alongside a group of ENS members – specifically, changemakers with personal experience of statelessness and representatives of communities affected by statelessness. The learning programme included a bespoke training series, delivered in March and April of this year, and a plan to develop a mentorship scheme

I didn't know there are so many details on how to define a person as stateless. It's very interesting and has widened my perspective.” – Training participant

Currently, there’s a lack of collective, available knowledge outside specialist academia around the experience of statelessness. Little is also known about the legal contexts with which stateless people must engage in different countries, or movement building in this space. It’s rare to find papers or research that speak to statelessness across a global context. We heard from the co-design panel and training participants how this makes the experience of statelessness incredibly isolating.

In witnessing ENS’ efforts to bring together changemakers, it became clear that there's no overarching body of knowledge that will be useful for everyone. This was our main challenge: when engaging changemakers located in different parts of the world, how could we ensure that the knowledge shared through this learning programme would be relevant across all their contexts? 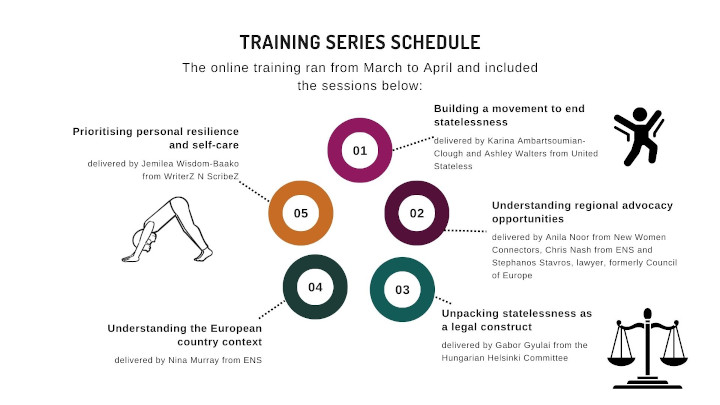 [I learned] how to catch the fish instead of just eating it.” – Co-designer

In the field of citizen participation, Arnstein's ladder is used to depict the degree to which citizens are involved in designing the services and initiatives they interact with on a daily basis. It starts with non-participation, shifts into tokenism, and then ends with citizen control. This is a useful framework to conceptualise how we should approach designing services in partnership, and to shift power in a way that inverts the usual power structures that exist between citizens and institutions in favour of a more ‘by and for’ approach.

This approach is particularly poignant for ENS’s work supporting communities of stateless changemakers. They’re a diverse group, but they all share the experience of living without a nationality. This is something that very few people – including the bureaucrats making the rules impacting stateless people – fully understand.

A core priority for ENS is to platform this group and work together to build movements to improve their experiences within state systems. This project presented a real opportunity to provide space for changemakers to design something from the ground up, from their perspectives, that is potentially going to be impactful for other changemakers in similar positions.

I enjoyed…the exchange of thoughts and ideas in a safe environment…the sharing of (personal) stories and experiences and the mutual respect for each other and for privacy as always. To connect with each other and bringing together our knowledge, participating in the co-design process has been a great experience.” – Co-designer

When we began working with ENS changemakers, the goal was to design something that would fill the gaps they had identified in their own knowledge, and in turn, the knowledge of other changemakers and professionals in the space – and to provide members with the opportunity to learn together, network and bring them closer to power.

As a facilitator, what really struck me about this group is that they’re each dealing with the extremely severe circumstances that have been imposed upon them, and most of them have been dealing with that for their entire lives; but the space they made to support each other, work together, and show up emotionally to hear and hold each other’s experiences made for a really special group dynamic.

Working as a team, we started by identifying some wider thematic connections which helped us build a training series that worked for changemakers from different country contexts. Many of them wanted to delve deeper, particularly into contexts with which they were less familiar. The group also wanted to hear more success stories that they could point to in their influencing work, as examples of best practice.

Even though they have such diverse experiences, the main challenges they’re facing overlap, so many of their personal and professional needs were similar. This enabled us to identify and design something that each participant felt was useful. The feedback from co-designers has been resoundingly positive. 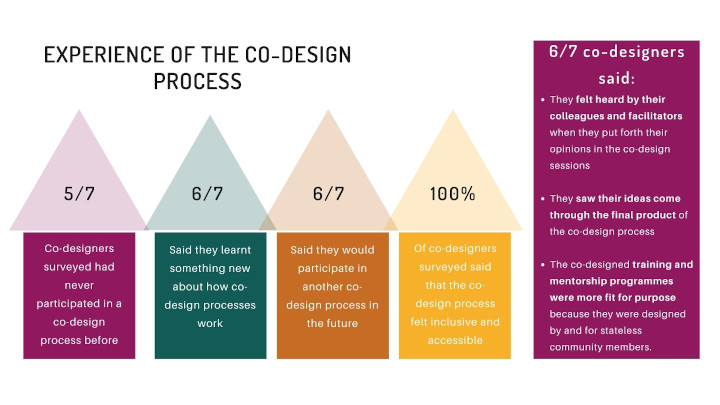 Striking a balance – challenges of co-design

The improvement lies in the frequency of such a session. It is imperative, especially for stateless individuals, to learn to reflect upon the inflicted wounds. We need to be in the process of healing before engaging in rigid legislative endeavour.” – Training participant

While the current popularity of co-design is encouraging, it is also important to highlight the challenges. Although co-production is an important part of the civic process, it should not obfuscate the responsibility of those in power to make the structural changes needed to alleviate oppressive systems. Institutions committed to working in this way should take care to ensure that people in marginalised positions are not left alone with the burden of solving problems they had no hand in creating.

There’s also an internal challenge: institutions interested in commissioning co-design work often begin the process feeling excited about the prospect of innovation and learning, alongside a commitment to working in a more inclusive way. But in practice, as the work progresses, the messiness of the process – including not knowing what the outcome will be in advance – often worries those who are used to more regimented ways of working. The process can be challenging to adjust to; there’s always a lot of critique of the institutions involved, and sometimes there is fear around the ideas that come to the fore.

Institutions can gain invaluable insight from co-design projects, but they must be willing to adapt internally to more iterative ways of working. The process is about letting go of personal assumptions around how to get from point A to point B, and actively listening to the challenges co-designers are facing within the status quo.

The ENS Learning Programme featured two core elements that enabled its success: an institutional commitment to adapting to the unpredictability of a co-design process, and a co-design panel of changemakers with an established baseline of trust and community, who felt able to share their expertise so generously.

Collective decision-making is never easy, and it’s rarely a straight line. It’s about moving beyond pandering to the majority, and instead, reconceptualising how we might create spaces and services which are more adaptable to diverse social needs.

Ultimately, a balance is required. Co-design isn’t a catch-all solution for tackling structural oppression, but it can result in powerful movement building that helps us hold state actors and institutions to account for the reform they are responsible for implementing.

We extend our thanks to our trainers, collaborators, and the Rosa Luxembourg Foundation for their support of this project. Special thanks to the co-design panel, whose expertise and insight made this project possible.