In the decades following World War II, citizenship stripping disappeared as a practice in the West, in no small part because the practice had come to be associated with totalitarian regimes. But it is now making a comeback – repackaged for the 21st century as a counter-terrorism instrument.

In spite of security experts’ warnings that this measure is counterproductive to the fight against international terrorism, globally an alarming one in five countries have introduced or expanded the power to deprive citizens of their nationality on the grounds of disloyalty, national security or terrorism since the year 2000. Europe is at the epicentre of renewed interest in citizenship stripping: 18 of the 37 countries that expanded their powers are in this region.

A new report, launched today by the Institute on Statelessness and Inclusion (ISI) and the Global Citizenship Observatory (GLOBALCIT), offers the first comprehensive global survey of legislative provisions regulating nationality deprivation in relation to national security. It covers 190 countries, discussing the prevalence and scope of these powers, which authority can take deprivation decisions, whether citizenship stripping can result in statelessness and more. To map these provisions, the report makes use of the GLOBALCIT Citizenship Law Dataset, supplemented with additional analysis and a brand new longitudinal study of how deprivation powers relating to ‘disloyalty’ have evolved since the year 2000.

The report finds that 79% of countries provide for nationality deprivation on at least one of the following security-related grounds: disloyalty; military service to a foreign country; other (non-military) service to a foreign country; other offences. Deprivation on the grounds of fraudulent acquisition is sometimes also used to target populations that have been identified through a securitised lens – as demonstrated in the report with the case study of Bosnia and Herzegovina, where the Citizenship Review Commission was tasked in 2005 with actively reviewing the naturalisations of mujahideen who fought in the war in the 1990s. 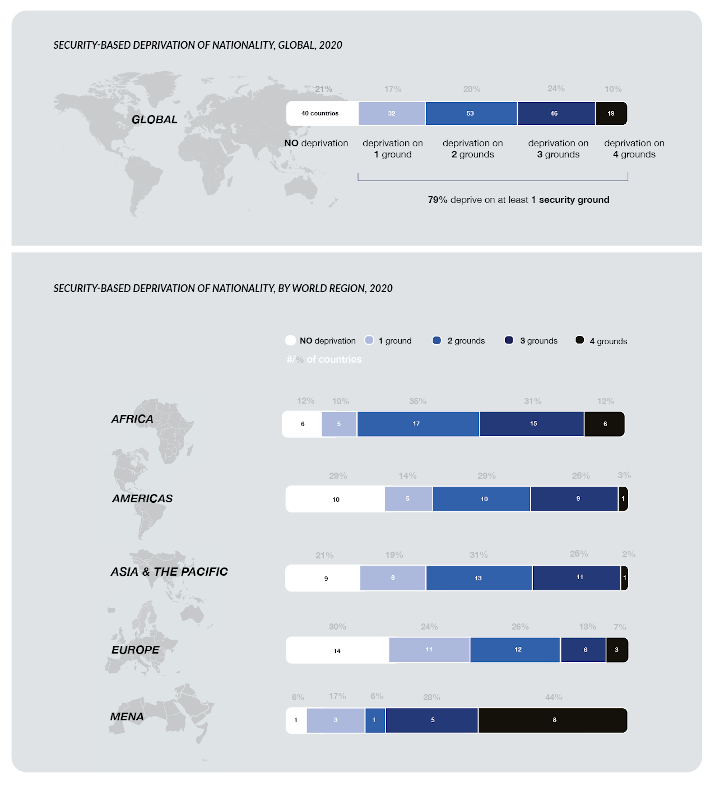 ‘Disloyalty’ is the most common type of security-related citizenship stripping ground: on 1 Jan 2022, 134 countries had deprivation grounds on their books that relate to ‘disloyalty’ (including treason, terrorism or harm to the interests of the country). This means only a minority of around 30% of countries do not have such powers. The scope of deprivation powers relating to disloyalty is often very broad, leaving much room for discretion and raising concerns around legal certainty. Concepts such as “conducive to the public good” or “vital interests of the state” are not further defined in the law.

Countries with this form of securitised citizenship stripping almost universally provide for withdrawal of nationality by decision (i.e. non-automatic). This is important because it allows weighing relevant factors in individual cases in order to avoid arbitrariness. However, in two-thirds of countries, deprivation provisions are only applicable to certain categories of citizens, most commonly citizens by naturalisation. While this approach limits the scope of powers, it is problematic because it can lead to discrimination against minorities. Moreover, in spite of clear international norms prescribing the avoidance of statelessness, three-quarters of countries that provide for loss of citizenship due to disloyalty have no safeguards in place to ensure that this does not result in statelessness.

Europe as the epicentre of expanded nationality deprivation powers

The new report also analyses global trends in nationality deprivation since the year 2000 – to how powers evolved after the 9/11 terrorist attacks in the United States and during a period marked by the rise and fall of ISIS. It finds a clear trend of increased prevalence and greater applicability of nationality deprivation based on broadly defined ‘disloyalty’-related security concerns. 37 countries added new grounds for nationality deprivation that relate to national security or counter-terrorism – equating to 1 in 5 states globally. Half of these did not have any such powers on the books in 2000. 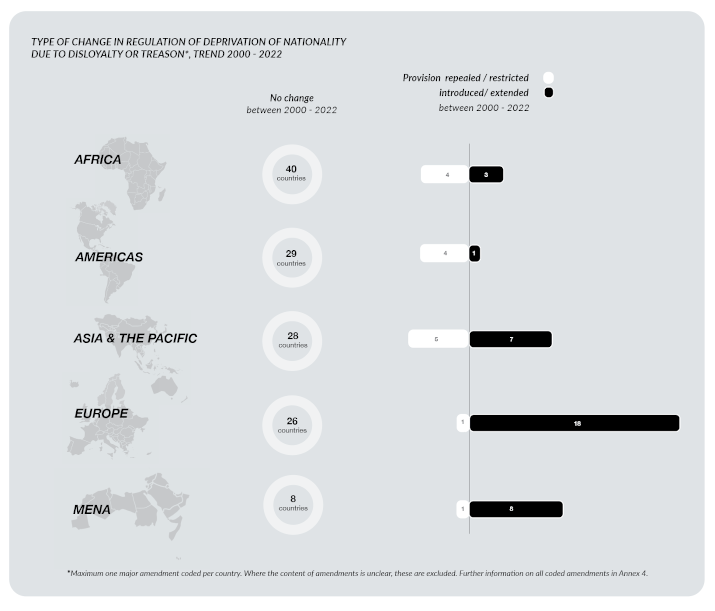 The analysis identifies Europe as the region where the securitisation of citizenship has been especially prevalent. A total of 18 European states expanded their powers since the year 2000: Bosnia and Herzegovina, Albania, Austria, Azerbaijan, Belarus, Belgium, Denmark, Estonia, Finland, Germany, Italy, Kazakhstan, Latvia, Liechtenstein, the Netherlands, Norway, Romania and the United Kingdom. In some of these countries, such as the United Kingdom and the Netherlands, the cumulative effect of successive legislative amendments has been to expand powers, increase the scope of who can be targeted, bestow more discretion to the executive in the use of nationality deprivation and weaken procedural protections.

This is not an entirely new or unexpected discovery, given how much attention this issue has garnered in the European press, and earlier reports such as the ENS Thematic Briefing on deprivation of nationality in Europe and Jules Lepoutre’s Citizenship loss and deprivation in the European Union. Nevertheless, the report launched today sets evolving regional practice in global context, showing that Europe accounts for over half of all countries globally where citizenship stripping powers have been expanded on the pretext that they are necessary to protect national security in the fight against international terrorism. Only in the Middle East and North Africa has there been a higher growth rate of citizenship stripping powers.

The report also shows that when this evolving state policy and practice is held up against international norms – synthesised in the Principles on Deprivation of Nationality as a National Security Measure – a variety of problems arise, including: a high risk of violation of the principle of non-discrimination due to the framing of legislative powers; the use of vague language, coupled with insufficient procedural protections, opening the door to arbitrariness; and lack of safeguards against statelessness.

Importantly, the new report also makes a countertrend visible, with 15 countries either completely repealing or significantly limiting their deprivation powers during the same post 9/11 period. These countries, found mainly in the Americas and Asia Pacific region, demonstrate that political decisions to broaden deprivation powers are not irreversible. Canada presents a noteworthy example, where restrictive deprivation powers introduced in 2014 were reversed just three years later, in favour of pursing justice through the application of criminal law. These changes were ushered in under the leadership of Prime Minister Justin Trudeau, who helped to underscore that while national security and counterterrorism remain serious concerns that need to be addressed, states have other tools to adequately respond without having to resort to nationality stripping.

Today, there are 56 countries globally where nationality cannot be deprived on grounds relating to national security – including several in Europe and the Americas where citizens are protected against involuntary loss of their nationality under the constitution. The report also shows how a number of countries (including Sweden and the Czech Republic) have resisted populist calls to instrumentalise citizenship in the fight against terrorism – favouring the use of criminal justice measures and steering away from a measure which hugely divisive and has, in any case, not proven to be effective.

The report warns that resurgence of citizenship stripping has a corrosive effect on the most fundamental legal status one can obtain: a nationality, which is also protected as a human right. Instrumentalising citizenship in the fight against terrorism risks normalising denationalisation as a legitimate power for states to hold over their citizens, with a knock-on impact for international efforts to protect the right to nationality and prevent statelessness. As more states treat nationality as a privilege that can be taken away at the discretion of the government, the prospect for successfully protecting against arbitrary deprivation of nationality – as provided for under the Universal Declaration of Human Rights – is progressively eroded. The report appeals for a moratorium on the use of citizenship stripping in the fight against terrorism, urges those states that recognise nationality as a right to lead the way in challenging the post 9/11 expansion of nationality deprivation powers and calls on states that have these powers on their books to urgently reconsider the appropriateness of instrumentalising citizenship stripping as a security measure.