I was pleased to be able to lend my voice to the European Network on Statelessness’ #LockedInLimbo campaign at an event at the Parliamentary Assembly in Strasbourg yesterday. The campaign seeks to build a platform for action to protect stateless people from arbitrary detention in Europe.

Statelessness disrupts the enjoyment of many human rights. Thanks to the terms of reference given to me by the Secretary General of the Council of Europe, I have been able to gain insight into how this happens in the context of migration.

Migration and statelessness are historically inter-connected: persecution and discrimination of stateless people in their countries of habitual residence can be a reason for migrating, while migration can also generate statelessness.

Immigration detention is a recurrent issue in Europe and in the world today. Since my appointment in February 2016, I have visited many such places of detention. This has helped me to establish that detention has become a standard measure of migration management. States regard immigration detention as an efficient tool, using it widely for children, women, persons with disabilities and those who are stateless. Detention is a traumatic experience for anyone. Its application for immigration purposes does not change its perceived punitive nature nor its unsuitability for those in vulnerable circumstances, including stateless people. Recent research by the European Network on Statelessness shows that stateless people are particularly vulnerable to lengthy and repeated detention simply because they lack a nationality or any country to which they can be returned.

Here at the Council of Europe the concern about immigration detention and statelessness has prompted action to find solutions at multiple levels. Firstly, there is a concerted effort to define standards for immigration detention. A draft instrument was circulated for public consultation in June 2017. In addition to standards on material conditions of detention, the codifying instrument may also include rules concerning procedures for screening persons for vulnerability and statelessness; such procedures should help assess the proportionality of the detention measure. Making sure that vulnerability and statelessness are properly identified is an indispensable step to preventing unnecessary and arbitrary detention. So I believe that the consultation exercise, which has emphasised the need for precise procedures to register and identify all personal features of those concerned, statelessness included, can contribute to the further improvement of the draft; something that is needed, as I pointed out when opening the consultation hearing on 22 June 2017. 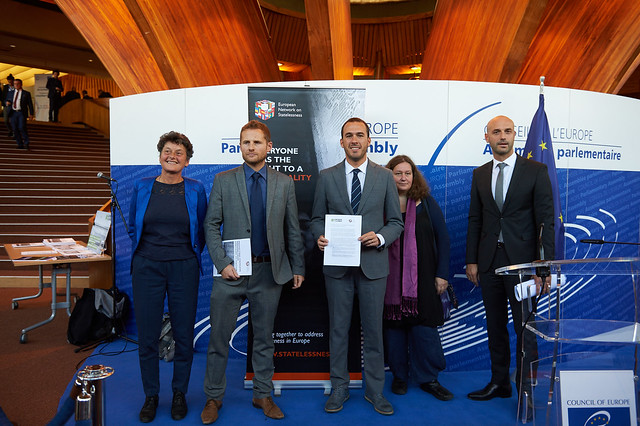 Thirdly, as regards statelessness itself, the Council of Europe Action Plan on Protecting Refugee and Migrant Children in Europe provides for the identification of practical solutions which would avoid statelessness among refugee and migrant children. Practical guidance with appropriate solutions will be drafted to assist states to improve administrative practices, to better address conflicts of laws, non-registration of births, and the risk of statelessness. The Action Plan views the identification of such solutions as a prerequisite for accessing many human rights. Our experience tells us that to move things forward, Council of Europe action needs to be backed by awareness-raising and an alliance of actors that will push for change.

In this sense, ENS’ #LockedInLimbo campaign is an excellent way of overcoming inertia, of keeping the issue on the table of decision-makers and in public debate, and I have expressed my support for the five recommendations for action outlined as an agenda for change. The campaign is a constructive way of fostering engagement at different levels and I hope its voice is heard and that it will contribute to increased safety to stateless refugees and migrants and to respect of their human rights.

Statelessness among resettled Bhutanese refugees in Europe: An unresolved problem

As part of one of the largest refugee resettlement programmes of its kind, over 2,000 refugees from Bhutan have been resettled to Europe since 2007.…
10 Jun 2021 / Ram Karki, former President of the Bhutanese Community in the Netherlands, Coordinator of Bhutan Watch and Head of the Global Campaign for the Release of Political Prisoners in Bhutan

A missed opportunity to address childhood statelessness in Poland

One of the most devastating characteristics of statelessness is that it affects millions of children across the globe. In countries like Poland,…
3 Jun 2021 / Katarzyna Przybysławska, Legal Aid Center - Halina Niec