Statelessness is a significant problem across the MENA. With national legal frameworks in the region taking little account of the reality of statelessness, civil society actors are now coming together to work for the protection of stateless people.

Networks emerge over time. Almost by their nature, therefore, it is often difficult to pinpoint a singular founding moment or event. This is certainly the case for the Middle East and North Africa (MENA) Statelessness Network - now known as “Hawiati” for short (see below for an explanation of the name). The network’s public launch in mid-2020 builds on a long prelude of chance encounters, strategic engagement and collaboration between actors involved in statelessness work in the MENA region.

Lively discussions at venues from Beirut to The Hague had explored the possibilities of enhancing existing collaboration and cooperation between those interested in statelessness across the region. Based on the model of other established regional networks such as the European Network on Statelessness, it was generally accepted that the coming together of stateless persons, relevant NGOs, researchers and activists would be a helpful initiative. Yet for some time, no formal statelessness network developed in the MENA.

Statelessness in the MENA region is often the result of discrimination, identity politics and conflict. Millions of Palestinians, who have lacked nationality since being expelled from their homes in 1948 at the creation of the Israeli state, are the largest stateless population in the region. Ethnic and religious discrimination has deprived members of certain minority groups of citizenship (including Kurds of Syria, Black Mauritanians and Shia opposition figures in Bahrain). Those whose ancestors did not register during key population surveys as states were established in the region sometimes find themselves excluded from contemporary citizenship. This is the experience of many Bedouin in Lebanon and the Bidoon in the Gulf. Additionally, the region accounts for almost half of the countries in the world where gender discriminatory nationality laws prevent mothers from being able to pass their citizenship onto their children on an equal basis with fathers, whilst many laws discriminate on the basis of religion, race, and disability.

A further key feature of statelessness in much of the MENA is that the phenomenon has received relatively little attention from state authorities, legislators and advocates. As both a cause and consequence of this lack of attention, the scope of the problem is significantly under-estimated in available statistics. For example, UNHCR - the United Nations agency mandated to identify and protect stateless people worldwide - holds no figures or estimates for many MENA countries despite believing them to have a considerable stateless population (i.e. in excess of 10,000 individuals). While the agency’s latest figure for stateless individuals across the region (excluding the 5.7 million Palestinians registered with UNRWA) is 370,519, the reality is undoubtedly much higher.

At the same time, all countries in the region lack specific legal provisions for the identification and/or protection of stateless people. There is thus no legal status for a ‘stateless person’ and most states do not consider nationality issues to be under the jurisdiction of national courts. Only a small number of MENA countries have signed up to the 1954 and/or 1961 Statelessness Conventions, leading to no recognised framework for dealing with statelessness and stateless people. Most exceptions in this respect are found in North Africa, which stands as something of a model for adherence to international standards in nationality legislation and practice. Nonetheless, progress in the region has been slow to say the least. During the High Level Segment on Statelessness held in autumn 2019 to mark the midpoint of UNHCR’s 10 year #IBelong campaign to end statelessness globally, Mauritania was the only MENA country to make pledges (4 out of 360 pledges in total).

In addition to, and as a result of, the legacy of ‘divide and rule’ colonial policies, problematic state practices and complex regional politics, statelessness work in the MENA region faces a challenging lack of common vocabulary. Often those affected by the issue in different contexts may not identify with each other, but are divided along ethnic, religious and sectarian faultlines - particularly when deprivation of nationality has been motivated by identity-based discrimination. The resultant disunity undermines effective solidarity between different groups and individuals affected by statelessness in the region, and their respective advocates and supporters. While the official Arabic term for a stateless person is ‘adeem al-jansiya (literally ‘lacking nationality’), in everyday speech, stateless people across the region use various terms to refer to themselves, further fragmenting the experiences of statelessness in the MENA. Some of these expressions are shown in the below graphic. 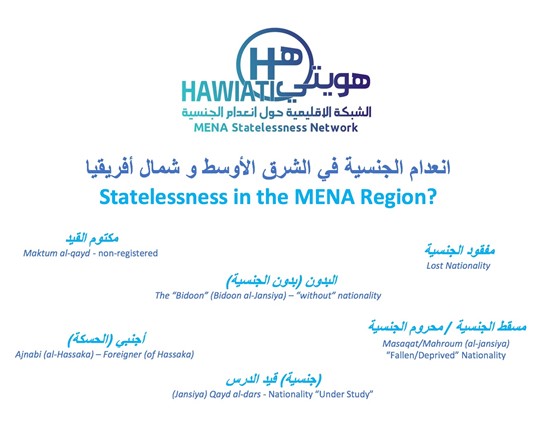 In contrast to other regions of the world, there are few NGOs or civil society actors dedicated to the issue of statelessness in the MENA. A notable exception is Ruwad Al Houkouk, who have for years provided tailored legal assistance to stateless people in Lebanon, while engaging with the government to advocate for policy solutions and legal reforms. Other NGOs operate largely from the diaspora such as Salam for Democracy and Human Rights, which has focused on statelessness and deprivation of citizenship in the Gulf sub-region. Beyond these NGOs, the key statelessness actors in the MENA are individual lawyers, academics and activists who have often worked in isolation from one another.

Within this context, the network was established with the dual mission of i) reducing and ending statelessness and ii) protecting the human rights of stateless persons in the MENA. To this effect, it aims to engage in activities focused on the improved identification and understanding of statelessness; fostering solidarity and collaboration; and supporting advocacy.

Given the variety of people affected by statelessness in the region, finding a name inclusive of all profiles and identities was challenging. Meaning both “ID” and “identity” in Arabic, the word Hawiati encompasses the aim of the network. As per the network strategy, the first steps have been to engage and consult with actors within the region. This was both to foster further solidarity between the different affected communities, and for regional actors to guide the evolution of the network. With this in mind, we have created an online presence through Twitter and Facebook where we are sharing existing content and reaching out to new audiences. For instance, we have been pleased to promote Blank Maps, an engaging podcast series on MENA statelessness produced by Tala El-Issa and Sowt Platform. Internationally, we also look forward to collaborating with organisations such as the Global Campaign for Equal Nationality Rights and its partners within the MENA region, given the prevalence of gender discrimination, as well as working closely with our sister networks such as ENS, on overlapping and global issues. In terms of initial activities, we held an online survey poll where 82% of respondents stated that the network should concentrate on research, advocacy and capacity building, and this will form the programmatic focus of the network during this phase.

Our first public event was a webinar held on 10 December on understanding statelessness in the North African context. This focus was chosen as there has been relatively little attention given to statelessness in North Africa among international actors who work on statelessness. Speakers addressed the situation of statelessness in Tunisia, Mauritania, Egypt and for those from Western Sahara. We hope to produce a short briefing report of the issues discussed to provide a summary of the findings of the webinar, as well as hold a second webinar addressing the situation in the remaining North African contexts: Libya, Morocco, Algeria and Sudan. We are also developing strategic programmatic engagement on specific pressing issues in the region such as responding to the suicide cases among the Bidoon in Kuwait. Primarily, through all of the work we do, we are hoping to establish a platform for collaboration and building solidarity on the grounds of similar experiences across the region.