“Grandmother, you have lived and worked your whole life in Latvia, and survived a war... How is it possible that you, such a remarkable person, are a non-citizen and I, a child (…), am a citizen of Latvia?”

This question represents the situation faced by a number of families in Latvia. They remain divided into the older generations (grandparents and sometimes parents) who remain non-citizens and younger generation (grandchildren) who are citizens. Undeniably, there are other cases of non-citizenship which don’t split down the generational divide, however, this blog will specifically look at the growing divide between younger and older generations.

Who are non-citizens and what distinguishes them from stateless persons?

According to the Law on the Status of Those Former USSR Citizens Who Do Not Have the Citizenship of Latvia or Any Other State, in force since 1995, non-citizens are former Soviet citizens and their children, not citizens of any state, provided that on July 1, 1992 they were either registered as residing on the territory of Latvia, or it was their last place of registration.

Generally non-citizens enjoy broader protection than prescribed by the 1954 Convention Relating to the Status of Stateless Persons. In fact, equal to citizens, non-citizens enjoy human rights protection as awarded by the Constitution of Latvia. The amended article 2(2) of the Former USSR Citizens Act states that non-citizens have the right to preserve their native language and culture provided it is in compliance with national law. Additionally, they have the right to reside and not to be expelled from Latvia, to enjoy diplomatic protection abroad and to receive social guarantees equal to citizens (with exceptions). For instance, working experience outside of the territory of Latvia prior to December 31, 1990 is not addable when determining state pension and unemployment benefits.

Which rights are affected by the status of non-citizenship?

Importantly, the access of non-citizens to civil and political rights is significantly curbed, with three main inequalities specifically worth mentioning.

Firstly, non-citizens are precluded from occupying certain professions both in public and private sectors. Professions in public arena which can be pursued solely by the citizens of Latvia range from civil servants, border control guards and judges to employees of the State Forestry Service, firefighters and policemen. In the private sector non-citizens cannot pursue a career as lawyers, notaries, detectives and employees of security services to mention a few.

Secondly, property right laws are more favorable to citizens than to non-citizens. For example, in order to buy property non-citizens must obtain a special permit from the municipality. They are entitled to a lesser share of privatized state-owned enterprises than citizens. Furthermore, non-citizens are hindered from obtaining certain types of property, such as land adjacent to border regions, as well as lands usable for agricultural and forestry purposes.

Thirdly, non-citizens are effectively excluded from political life in Latvia. They can neither vote, nor be elected as members of parliament, government ministers or ombudspersons. Non-citizens are also precluded from participating in referenda and forming political parties.

Next let’s look at the measures Latvia has undertaken to mitigate the status quo and what demographic implications arose from that.

What has been done to decrease non-citizenship among children?

Article 3(1) of the Citizenship Law prescribes that children born on the territory of Latvia after August 21, 1991 can be registered as citizens based on the volition of one of the parents. To effectuate this provision, both parents must be stateless or non-citizens and legally reside on the territory of Latvia (for more, you can read ENS Blog: "Statelessness among children in Latvia: current situation, challenges and possible solutions").

Notably, only since the latest amendment of 1 October 2013 of the Citizenship Law it is possible to apply for child citizenship by virtue of solely one parent. Prior to that, the policy was stricter and both parents were required to apply unless there was no record of the father on the birth certificate or one parent deceased. Hence, in cases where one of the parents did not agree for the child to be registered as a citizen, or he/she was unable to file an application for whatever reason, or if one parent lost contact with the other, the application would fail to fulfill the procedural prerequisites.

In order to simplify the procedure, the amended Citizenship Law provides that a child of non-citizens can be registered as a citizen at the moment of registration of the child’s birth. This eases the administrative process to obtain citizenship for a newborn child as no separate application is required (unless parents decide otherwise). According to statistics of the Office of Citizenship and Migration Affairs, the number of newborn children registered as non-citizens has experienced a stable yearly decrease. In the second part of the 1990s and the beginning of 2000s on average around 500 non-citizen children were born annually in the territory of Latvia. By 2010, the number decreased to 330. Remarkably, after the latest amendment of the Citizenship Law, only 82 newborns were registered as non-citizens in 2015. It is not clear whether the unprecedentedly low numbers are attributable to the innovations in legislation or general demographic changes in population.

What has been done to decrease non-citizenship among adults?

Adult non-citizen can obtain citizenship through the process of naturalization introduced in 1995. It encompasses a Latvian language test, as well as a citizenship test. Although there have been attempts to simplify both the application procedure and test, the measures did not prove to be sufficient to encourage non-citizens to apply. As the following table shows, since 2005 there has been a constant decrease in the number of persons who obtained citizenship of Latvia through the process of naturalization.

Figure 1. Dynamics of the number of persons, who were granted Latvian citizenship through the process of naturalization, 1995-2013 (Source) 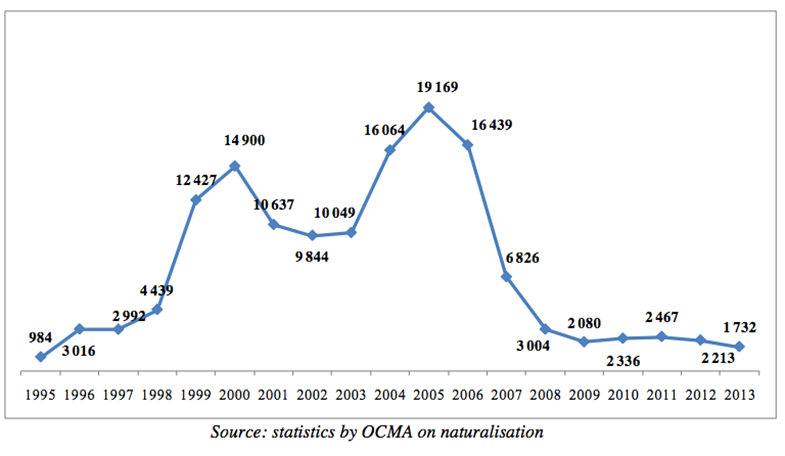 Specific reasons for non-application for naturalization are listed below.

Figure 2. Reasons, why non-citizens do not plan to obtain Latvian citizenship, 2012

Current demographics of non-citizens in Latvia

According to the database of the Central Statistical Bureau of Latvia (see Figure 3), the percentage of non-citizens has decreased each year since 1999.

Figure 3. Population of Latvia by Citizenship at the Beginning of the Year

In 2016 Report to the United Nations, the Ministry of Foreign Affairs claims successful integration policy was the reason for a significant drop, based on the above-mentioned amendment of the Citizenship Law and simplification of naturalization procedure.

The question remains why are there still just over 12% of non-citizens if integration policy has been successful? As Figure 4 indicates, the highest numbers of non-citizens are adults, not children.

Figure 4. Division of Latvian citizens and non-citizens in age groups in 2014 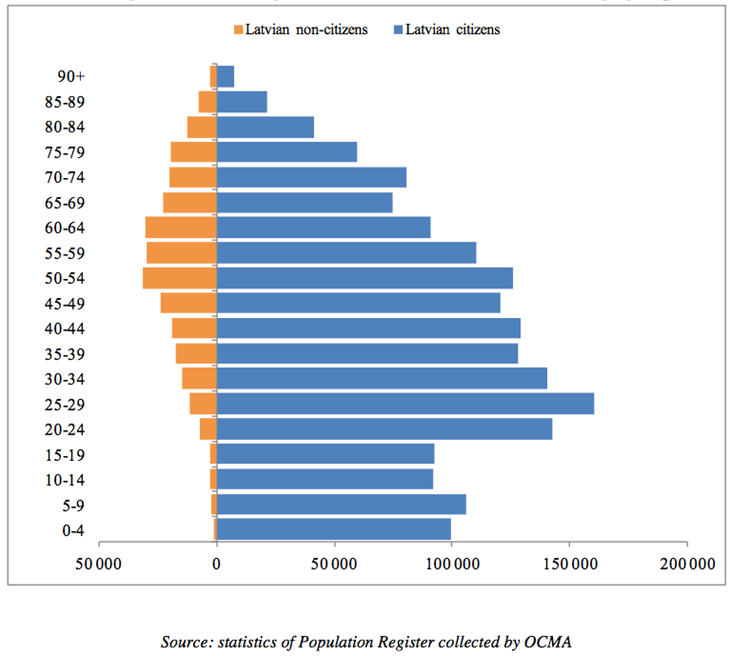 For adult non-citizens, the only means to obtain the citizenship of Latvia is through naturalization. Figure 1 illustrates diminishing number of granted citizenships since 2005. The Office of Citizenship and Migration Affairs provides that in 2014 and 2015 the lowest numbers of citizenships were granted (939 in 2014 and 971 in 2015 respectively comparing to 19,169 in 2005). The latter does not translate into a “successful integration policy” at least numerically. Yet the percentage of citizens rises, while the proportion of non-citizens in Latvia declines.

What is the decreasing number of non-citizens attributable to? According to the findings of the Baltic Institute of Social Sciences (BISS), partially the decrease in the number non-citizens is indeed attributable to naturalization and to simplified access of citizenship to newborn children. Other factors should not be underestimated though. Each year a significant number of non-citizens opt for Russian citizenship, while others permanently leave the country.

BISS projects that Latvia should solve the problem of non-citizenship in the next two decades. However the claim that this is due to a “successful integration policy” is deceptive if it only accounts for acquisition of citizenship for children and naturalization of adults, while disguising that numbers of non-citizens are dropping because of other reasons.

While Latvia’s policy is favorable to children of non-citizen parents and can prove effective in bringing down numbers close to zero, integration policy among adults still remains an open issue. Intended as a temporary measure, non-citizenship of Latvia was granted to persons living on the territory of Latvia in 1991 who were not citizens of Latvia or any other state (after the dissolution of USSR). Many of those people voted for independent Latvia, and what they received in return was non-citizenship. The past two-and-half decades show that this temporary policy was transformed into a permanent reality. Unless non-citizens pass a naturalization exam, they will remain to be citizens of no country with no political rights.