Stateless migrants often face considerable difficulties when travelling to, and newly arriving in, countries of potential asylum. Nonetheless, the vulnerability of such individuals has remained mostly invisible within the large refugee and migrant flows that have affected Europe over the last year. With their status sometimes unidentified, even by the authorities processing their claims for protection, many continue their suffering in silence.

“You know European law far better than I do,” says the man who has spent the greater part of the last year between sleeping on a basketball court and living in a dismal asylum seeker reception centre. “I arrived in Germany in September 2015, and until now am awaiting my turn for a court appearance to tell the government here that I don’t have a nationality.”

This man, Dilbirin, is from a category of Syrian stateless Kurds known as maktumeen (the “concealed”). He is one of approximately 300,000 people who have suffered without the benefits of nationality as the result of a discriminatory and exceptional census carried out in the Kurdish-majority Hassaka governorate of north-eastern Syria in 1962. For his entire life, Dilbirin has possessed no identity document except a single tattered hand-written paper known as “shahedet ta’reef” [certificate of recognition]. Issued by the local community representative in Syria, this most basic of documents was the only one that a maktum could acquire, and it had very limited application for accessing public services in the country.

“I am now in Europe, but legally nothing has changed,” he says. Hearing of the fate of other stateless Syrian Kurds in Europe, who have encountered considerable delays and complications in regularizing their asylum status, Dilbirin is beginning to question his own intentions. Should he just give up on the dreams he had for a European solution to his dilemma and that of his family? Indeed, Dilbirin’s relatives back in refugee camps of Iraqi Kurdistan, where he himself was a refugee for some years, are increasingly encouraging him to do so. Absence from his two young children there, who have been supported by Dilbirin’s brother since he left, has taken a heavy psychological toll on the father. The man who once undertook the dangerous and tiring journey across Europe by illegal means in hope of finally finding a durable solution to his life-long plight is now desperately considering re-engaging his smugglers to send him back.

Unfortunately, such a situation is not rare for stateless asylum seekers, especially those who have arrived to Europe since the onset of the Mediterranean refugee/migrant crisis. I encountered Dilbirin and numerous similar cases as part of research for the new working paper ‘Statelessness Displaced: Update on Syria’s Stateless Kurds’ published by the Institute of Statelessness and Inclusion. The paper explores “the impact that displacement (especially forced displacement) to another country can have on the situation of those who are already stateless, and how this can determine their options for durable solutions in contrast to persons enjoying an established identity.”

Through the case study of stateless Kurds from Syria, the paper seeks to highlight some of the legal and protection challenges experienced by stateless persons more generally within the asylum context of European countries:

“It is evident that in many cases status determination for stateless persons is not happening upon arrival and during initial registration in countries of European asylum. 12 stateless Kurds in Germany [7], Switzerland [1], Sweden [3] and Austria [1] (representing 74 family members in the same situation) mentioned that, having spent between three and nine months in the country of asylum, they had all as yet not had the opportunity to explain their stateless situation to officials. One individual in Germany since June 2015 said that on three occasions she has visited the local council offices to clarify her status, and each time had been informed not to return until being called for interview. All of these research participants spoke of the anxiety, and in some cases depression, caused by having no clear understanding of their situation or future.”

While further research is required in order to establish conclusions about the comparative situation of stateless persons arriving to different European countries, the interviews overwhelmingly reveal that many stateless Kurds across Europe are unfamiliar with their legal rights according to international law. Moreover, they often feel uncertain whether/how to articulate their situation to the national authorities in the country of potential asylum. For instance, one individual wondered, “Should I claim that I used to have papers, but then lost them at sea on the way here? I can say the smuggler took them? Will this be better for my case?” There is evidently fear that stating one’s statelessness could result in the continuation of the exclusion and discrimination suffered by the undocumented community for years in Syria. 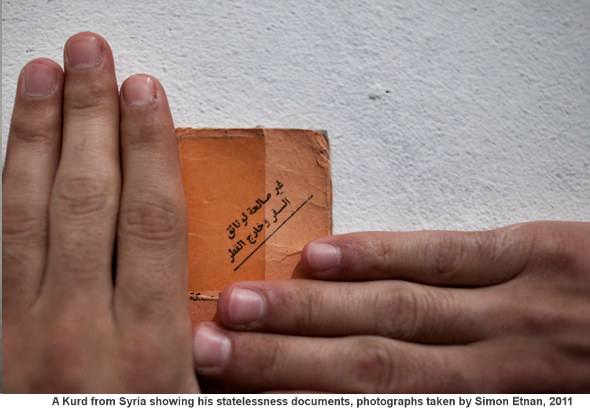 It should be noted that activists within the Kurdish community in Syria have long mobilized to advocate for durable solutions to the statelessness problem in the country. In 2003, protesters (mostly children) marched towards the UNICEF building in the Syrian capital Damascus. They carried roses and signs campaigning for naturalization of stateless Kurds. In the context of large-scale displacement as a result of the Syrian civil war since 2011, increased numbers of stateless Kurds have travelled to Europe illegally in order to escape their hopeless situation. It is therefore essential that current advocacy action focus on the swift identification of stateless persons within European asylum systems, as well as ensuring that the most vulnerable displaced stateless families are not excluded from official refugee resettlement schemes on the basis of their lack of nationality.

As for Dilbirin, he continues to await clarity about his present situation of legal limbo. Moreover, he hopes that his eventual court appearance, which has now been scheduled for the coming month, will provide relief for the far-reaching impacts statelessness has had on his life.

On 13 June 2016 the Institute on Statelessness and Inclusion released the paper “Statelessness Displaced: Update on Syria’s Stateless Kurds” as part of the second edition of its Statelessness Working Paper Series. You can follow Thomas on Twitter

Festive greetings to all

Thank you for following ENS blog updates in 2021. We’ll be taking a short break and are resuming our blog in January. Meanwhile, we wish you all the…
23 Dec 2021 / ENS Team