The moment of truth for undocumented stateless people in the Netherlands

The legislative proposal published by the Ministry of Justice and Security in September 2016 to introduce a statelessness determination procedure (SDP) is now due to be sent to Parliament. Yet despite its immanency many questions remain unanswered. What has the Council of State advised in their response to the proposal? Have any changes been made following the consultation process? When exactly will the Parliament consider the proposal?

After its publication in 2016, the proposal has been carefully scrutinised by civil society groups. ENS and ASKV have submitted a formal response to the government consultation (full submission here), pointing out perhaps the most glaring problem that the proposal doesn’t provide the possibility for individuals to regularise their status following the determination process. If this remains the case, the Netherlands will be the first country not to do so. All other 13 countries that preceded it in implementing a SDP allow for legal residence after determination of statelessness.

With the launch of the new online Statelessness Index this can now easily be put into context and the Dutch proposal can be compared with how other countries address this. For example, the Index makes it clear that all four countries with a dedicated SDP currently included provide a residence permit after statelessness has been established. And even though further improvements are necessary in some of the countries based on the Index assessment, in comparison the Netherlands would be severely lagging in securing basic civil rights to those recognised as stateless under the new procedure. 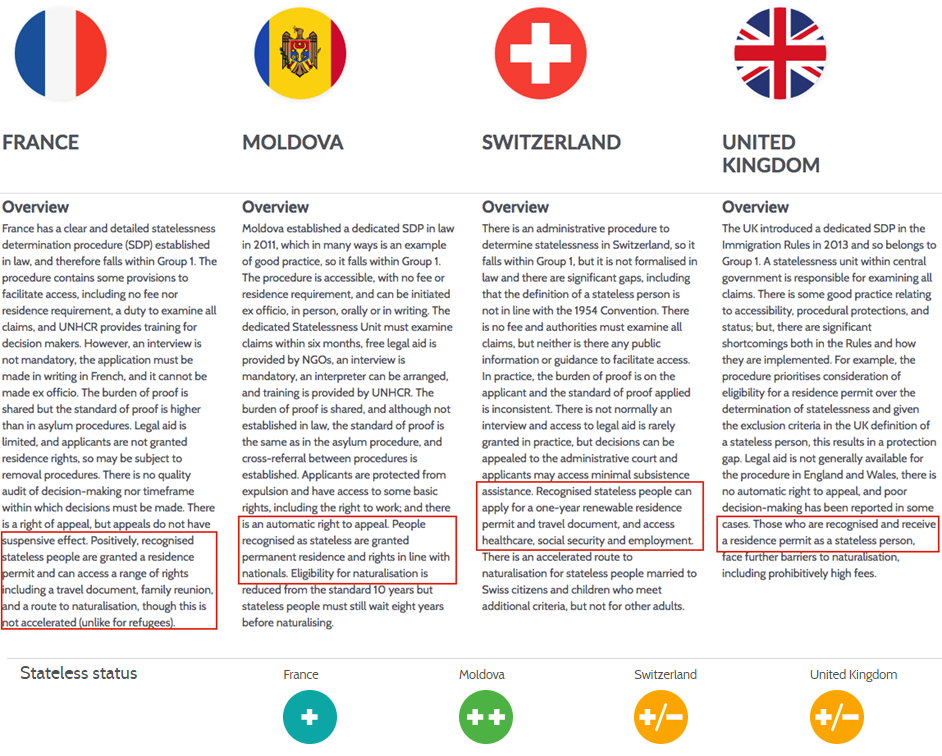 One of the stated reasons why the Dutch proposal doesn’t allow for a grant of legal stay is the pull-factor the government fears this would create. However, this is a misguided fear that has not been substantiated in practice. Based on the experience of other European countries with a functioning SDP (e.g. France, Spain, and Hungary) there has been no increase in influx of stateless people. Additionally, the Dutch government believes stateless people can return to a former country of residence or another country. However, it is widely known, and confirmed by the Dutch Advisory Committee on Migration Affairs, that stateless individuals often find it impossible to obtain necessary identity and travel documents to facilitate their return.

Lacking any other route to regularise their status, the Netherlands is referring undocumented stateless people to make use of the no-fault (“buiten schuld”) procedure, intended for people who cannot leave the country due to no fault of their own. However, this route is widely criticized by immigration practitioners for its low approval rate, extremely high burden of proof and for not considering statelessness as a separate category. Because of this, the no-fault procedure is not really suitable for stateless people, who cannot provide identity documents, and are as a result suspected of ‘non-cooperation’ and blamed for failure to facilitate return. One ASKV client going through the procedure strikingly said: “they understand I am stateless, but I always have to give them [Dutch Repatriation and Departure Service] more documents to travel. It is never enough.”

So what happens next? The proposed law has been presented to the Council of State for review and it is expected that it will be sent to Parliament in the coming months, after which the advice of the Council of State will also be made public. The following discussion in Parliament will be a crucial time to push for necessary amendments and a chance to lift stateless people out of this legislative limbo. The new Statelessness Index will help advocates point out how to close the current gap and offer examples of good practice form other European countries.