Protecting stateless persons from arbitrary detention in the Netherlands

Evidence shows that detention of stateless people is a worrying trend across Europe. Against this backdrop, the European Network on Statelessness has embarked on a three year project to map the extent of the issue, create advocacy tools and train lawyers and NGOs to protect stateless persons from arbitrary detention.

Today ENS is publishing the first in a series of country reports highlighting protection gaps and extent of the issue in the Netherlands. This work underpins the design of a regional toolkit for practitioners, which will be published on 30 November.

Stateless, unreturnable and detained in the Netherlands

"You can't send a Dutchman to Belgium just because he understands Flemish." That's how Angela, a 26 years old college student originally from Azerbeidjan summarised her absurd situation. Her request for asylum in the Netherlands was rejected, but because of her distant Armenian roots the Dutch government has for years tried to deport her to Armenia, even though she never lived there. In any case, both countries refuse to cooperate with her return, leaving Angela stuck where she is. This did not prevent Dutch authorities from detaining the whole family - awaiting an impossible deportation.

Unfortunately, Angela's story is far from unique. New research, published by ENS and conducted by ASKV / Refugee Support, demonstrates that detention in the Netherlands is often imposed without thorough inquiry about the prospect of return. Imposing detention when it is already apparent that removal proceedings are likely to yield nothing, risks violating domestic and international law.

The use of immigration detention in the Netherlands has declined markedly in just a few short years. Budged cuts dovetailed with civil society campaigns to reduce the routine application of administrative detention, and both the annual influx of detainees and the average detention capacity have gone down quickly.

In spite of such positive developments, a number of problems remain deeply entrenched – especially vis-à-vis stateless and ‘unreturnable persons’. Perhaps the biggest issue is that authorities fail to acknowledge the fact that in most cases of statelessness, return has become intrinsically impossible. Since detention may only be imposed as long as a clear prospect of deportation exists, this implies a due diligence requirement to rule out statelessness prior to any decision to detain. This could prevent the incarceration of persons whose return is a priori infeasible.

Currently this discovery is often made a few weeks after detention has already been ordered. Moreover, the prospect of deportation is too easily assumed to exist (e.g. based on a single successful removal), and examination of personal circumstances – including the juridically relevant fact of statelessness – figure insufficiently or not at all in the decision to detain.

Detention of persons from ‘difficult countries’

This ‘view to expulsion’ is also of central importance in determining the duration of detention. The average length of detention in the Netherlands (70 days) is significantly higher than that of many other European countries. While clear-cut cases of statelessness may face less risk (because the prospect of deportation is so obviously absent), persons whose citizenship status is more complex are more likely to be detained for disproportionately long periods. This is especially concerning where the inability to return is not due to one’s lack of cooperation, but because of some embassies’ systematic refusal to facilitate the return of their nationals.

Indeed, Dutch authorities are aware of these ‘difficult countries’, and the time spent in detention by their citizens is twice the overall average. What’s more, in the case of several countries, long-term detention did not lead to any deportations. Here, administrative detention appears to have become punitive in nature; to act as a deterrent instead of a measure of supervision.

“I can't trust people anymore”, one of the report’s interviewees confided. “It doesn't matter who you are. Detention changed me. My wife now calls me an oyster, 'you're always shut', she says”. Indeed, one of the most important contributions the Dutch government can make in the lives of stateless people, is to end what has often amounted to a lifetime of uncertainty. Without clear procedural solutions, they will continue to fear repeated detention, while also being unable to return. Even when released, few stateless persons perceive a solution, and they are often left to live aimlessly and invisibly on the margins of society. Actively utilising the threat of imprisonment to enforce their cooperation with an unfeasible return is simply inhumane. As the United Nations highlighted, “for detention not to be arbitrary, it must be necessary in each individual case, reasonable in all the circumstances, proportionate and non-discriminatory”. Having made several meaningful reforms already, the Netherlands now can and should offer a durable solution to all stateless people in the country.

On 4 November 2015 the European Network on Statelessness and ASKV / Refugee Support released the report “Protecting stateless persons from arbitrary detention in the Netherlands”. Summaries are available in both English [pdf] and Dutch [pdf]. The full report is available in English only and can be found here [pdf]. 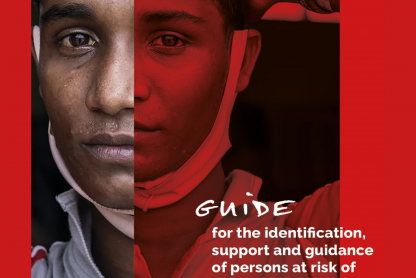