Rising to the challenge: promoting the voices of stateless people in Europe

The absence of stateless voices is not due to a lack of individuals’ willingness to speak out and be involved in the debates and decision-making processes which affect them. At least, that’s what our work with people affected by statelessness tells us.

Over the past year, through our #HearItFromUs project, the European Network on Statelessness has been working to improve our collaboration with stateless people, to involve them in our network and to ultimately make sure that what we say and do also reflects their views and priorities. We want stateless people to be empowered to deliver their own messages on what needs to change, both to decision makers and the wider public.

For the last 12 months we worked in close collaboration with our members Consonant, Fundación Cepaim and New Women Connectors, to bring together representatives from communities affected by statelessness in three countries – the Netherlands, Spain and United Kingdom. This work culminated in three community workshops organised in May and June to discuss the key issues affecting stateless people in each country, as well as to co-develop ideas for ongoing collaboration.

Workshop participants discussed issues specific to their county and while all countries are unique in their approach to addressing statelessness (see our Statelessness INDEX), many problems facing communities were similar in all three countries. Participants told us that stateless people face barriers accessing basic rights (such as education, work and healthcare), as well as certain legal procedures and routes to obtaining citizenship through naturalisation. Alongside a perceived lack of understanding and awareness from authorities about statelessness, community representatives also highlighted the absence of information and advice on statelessness.

Perhaps most striking was the common thread of the negative impact lack of nationality has on people’s mental health. One group of participants describing the isolation and challenges caused by statelessness as being on a ‘statelessness island’, isolated from everyone else, without a sense of belonging and not able to live your life. Participants expressed fears and worries about statelessness being passed on to their children and how it intersects with other problems such as racism and sexism which can lead to further marginalisation.

Community representatives highlighted how and why stateless people feel voiceless. We discussed ideas for future activities which could promote the voices of stateless people in Europe, including: information sessions and tools for communities; creating national statelessness fora or advocacy groups; public awareness raising through media, art and other platforms; arranging regular joint meetings between relevant authorities and stateless communities; and increasing collaboration between community-led organisations and national NGOs.

Since then, we’ve been building on the initial enthusiasm for collaboration by sharing media request, information and inviting feedback from community representatives on our #StatelessnessIndex on how to make it more accessible to stateless people. In October, we were delighted to welcome Anila Noor to our Board of Trustees. Anila is founder of a migrant and refugee-led organisation New Women Connectors and partnered with us to organise the community workshop in the Netherlands in June. Her experience and passion for community organising ensured that the workshop was a success. We were joined at the High Level Segment on Statelessness in Geneva earlier this month by Nijam Uddin Mohammed, Secretary General of our new member the British Rohingya Community UK, and were grateful for his support at our exhibition stall, and his intervention at our civil society side event.

Where do we go from here?

The energy and will that community representatives brought to the workshops is something we must now build on and match as civil society, donors, and policy makers to ensure stateless people are meaningfully represented, able to influence decisions and be heard on their own terms in relevant debates.

Doing so won’t be without its challenges, as we learnt over the past year. Building connections and relationships with communities will be crucial, but may involve overcoming various obstacles, such as lack of knowledge or identification with the word statelessness among communities, or lack of trust with unfamiliar NGOs. The lack of existing dedicated support for community-led organisations - many of whom rely on volunteers - to work on statelessness, also presents a barrier to ensuring stateless people can engage on the issue.

These are challenges that we must nonetheless rise to if we are serious about ending statelessness, and making sure stateless people are part of the solution.  More and better investment in communities affected by statelessness and community development work is needed, not just from the European Network on Statelessness, but also national and regional civil society, donors and policy makers.

To respond to the call for a coordinated space for community organisations and activists to interact, share information and plan activities around statelessness, ENS will work with community representatives to explore what this could look like regionally, and also with our members to see how stateless communities could be better integrated and represented within national advocacy coalitions and spaces.

ENS and some of its members are already working to provide more and better information about statelessness for people affected, and this is something that must be continued by us and others to empower stateless people to know and uphold their own rights.

We are proud of our diverse and growing network of members, but we recognise that so far our members mostly comprise organisations and individuals with policy, service provision, academic or legal backgrounds. Reaching out and growing our membership to include those who are directly affected by statelessness is something we’ve identified in our five-year strategic plan and have set a clear plan to address so that we are truly representative of stateless people in Europe. We already have strong community-led members within the network and need to support others to join and actively participate in the network. We all also need to continue recognising and representing the diversity of people affected by statelessness, and how gender, age, belonging to a minority, disability, or being LGBTQ+ can affect people’s stories and experiences.

While many refugee, migrant and other community-led organisations have been actively working within their own communities and the wider sector for years, civil society has overall been slow in waking up to working with these communities as equal partners. The past year has been an important learning curve for us, in terms of what is needed to effectively build connections with affected communities. We want to share these learnings with others in the sector looking to be better partners to the communities they work with and for, and so have developed a report with the learnings of our pilot #HearItFromUs year (here’s a summary of the report and a full version is available on request). 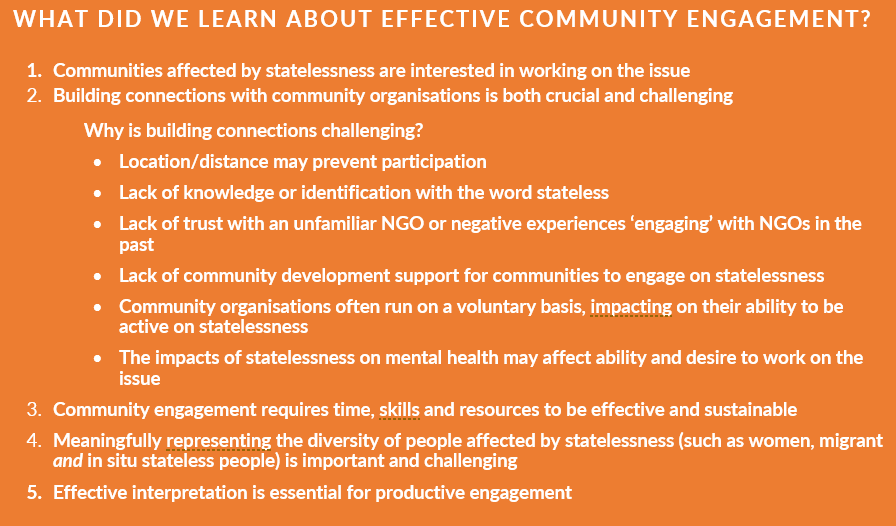 We look forward to building on what we have started, and to bringing community representatives and stateless activists from across the region together at our Annual General Conference in May 2020 to continue our collaboration.

This blog was first published by Routed Magazine in May 2021. We are re-posting it now to highlight the issues raised.
20 Jan 2022 / Thomas McGee, PhD researcher in the Peter McMullin Centre on Statelessness at University of Melbourne’s Law School, Australia

Festive greetings to all

Thank you for following ENS blog updates in 2021. We’ll be taking a short break and are resuming our blog in January. Meanwhile, we wish you all the…
23 Dec 2021 / ENS Team