Shapeless shapes: a call to action to shape our future

These are the three major themes I learned from graduate school: firstly, the world is not what it seems to be; secondly, it is more complicated than you think; and lastly, we are all connected together.

Like many people, I learned about statelessness in a class. The reality that millions of people are living without a nationality shocked me. But the most disturbing part was that I had never heard about this global human rights crisis. I asked all of my close friends if they knew. I asked my parents. No one knew. How could this be?

What frustrated me even more was that I felt like being an artist was useless when it came to statelessness. All the legal, historical, and political knowledge I did not have, seemed prerequisite to understanding statelessness and helping stateless people. I was completely overwhelmed.

Yet statelessness strangely felt close to home. At the time, I was waiting for over a year for my United States permanent residency card to be reissued (someone had stolen my wallet and my card was inside). I resonated with statelessness through the deep anxiety I felt while being in a temporary limbo. But it never dawned on me that my predicament could be trivial—even aspirational—to some stateless people. What would it feel like to be stuck in limbo, forever?

As a visual person, I know that a picture is worth a thousand words. Artists can provide an entirely different medium through which we can feel, learn, and share, especially when it is too painful to speak. Unable to articulate on statelessness, I began sketching, thinking out loud through an aimlessly moving pen. I wanted to show others the world that is not what it seems to be, even if it was a task too complicated and difficult.

It still amazes me that my silly doodles culminated into a graphic novel titled Shapeless Shapes. Through collaborating with Amal de Chickera, one of the co-founders of the Institute on Statelessness and Inclusion, I became even more aware of how deep the wounds went. Amal connected me toUnited Stateless, a grassroots organization led by stateless people living in the United States. I continue to collaborate with the two organizations around finding creative ways to educate the public on stateless issues.

In this blogpost, I would like to share some of the key ideas appearing in Shapeless Shapes.

The world was full of shapes

One of my favorite books growing up was If The World Were A Village Of 100 People by Ikeda Kayoko (you can get the general idea in this video). Reflecting on how abstraction can actually help us see the forest for the trees, I began to imagine the world in simple, geometric shapes. What would South Korea, the country I grew up in, look like in the world of shapes? How about the United States, where I live now? What about a Korean-American who might have citizenship in another country? A visual metaphor began to take shape. 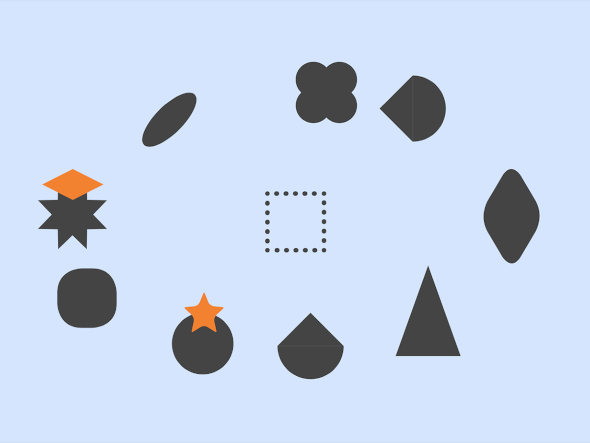 Realizing how this simple “world of shapes” metaphor could visualize complex concepts, I asked myself: what would a stateless person look like in the world of shapes? As I drew a square with a dotted line, the two words “shapeless shape” popped into my head. Something clicked. I realized that what had been so disturbing about statelessness was the fact that stateless people were rendered invisible in the eyes of the law, even when they clearly exist! I finally understood how and why governments treat stateless people as outsiders, criminals, and even subhuman. Too often, statelessness had been used as a weapon to marginalize people and to justify heinous crimes.

How does it all happen?

When I told people about the injustice of statelessness, I found that even the first time learners tended to assume that stateless people somehow deserved their situation. And many thought that they themselves had little to do with statelessness, because they have citizenship somewhere. Communicating all the ways how someone might become stateless—incompatible laws, wars, genocides, changing borders, discrimination of all kinds—was therefore critical. I wanted to reveal the arbitrariness and bureaucracy inherent in statelessness and that nationalities and citizenships are in fact socially constructed ideas.

The narrative that reinforces the justification of statelessness needed to be challenged as well. Not everyone recognized that law is enforced through violence and that lies and prejudices become facts through history books. The section on swords and pens aims to represent how all these aspects can work in tandem to stigmatize certain groups of people—silencing them, erasing them, imprisoning them, and forgetting about them. The swords and pens help question if we have become blind and complacent. Is it okay that some people are stripped of their rights and trapped in a cruel state of liminality?

A call to action to shape our future

Although I initially felt overwhelmed and helpless toward the issue of statelessness, creating Shapeless Shapes helped me realize that challenging statelessness requires a collective effort. Anyone with a genuine heart to build solidarity with the stateless activists and experts can contribute to the mission to reshape the world. The world is not what it seems, and it is much more complicated than we think. But we are all connected together. We can decide together how simple the world should be on certain issues. Will you stand up for the rights and recognition of all humankind? Will you take responsibility as a shape living in a world of shapeless shapes?

Watch the trailer of the book https://youtu.be/9CNC1akf3lA

Statelessness among resettled Bhutanese refugees in Europe: An unresolved problem

As part of one of the largest refugee resettlement programmes of its kind, over 2,000 refugees from Bhutan have been resettled to Europe since 2007.…
10 Jun 2021 / Ram Karki, former President of the Bhutanese Community in the Netherlands, Coordinator of Bhutan Watch and Head of the Global Campaign for the Release of Political Prisoners in Bhutan

A missed opportunity to address childhood statelessness in Poland

One of the most devastating characteristics of statelessness is that it affects millions of children across the globe. In countries like Poland,…
3 Jun 2021 / Katarzyna Przybysławska, Legal Aid Center - Halina Niec