A Stateless Person’s Take on ‘Stateless’

The Netflix series 'Stateless' caught my attention as well as that of my friends and colleagues months prior to its official release. How could it not? I am a stateless person, and a founding member of a US-based organization United Stateless whose mission is to raise awareness and to build  community among stateless people living in the U.S.

One of our greatest challenges has always been the fact that most people have no idea what the word 'Stateless' actually means.  For this reason alone, we waited anxiously for the series' release, hoping that it would serve as a powerful educational tool to help shine light on a unique struggle unfamiliar to most people, yet so central to our everyday lived experience.

My hopes were high. After all, Cate Blanchett, one of the series' executive producers, seemed like a knowledgeable ally. She has served as the UNHCR Goodwill Ambassador since 2016, and has been a vocal public supporter of our cause.

As the closing credits rolled on the final of the series' six episodes, I felt no elation. What I felt was not exactly a let-down either. Instead, I felt like I was suffocating in an elevator plunging deep into a secret subterranean hell. Imagine for a moment that we are talking about a made-up series titled loudly, 'Racial Injustice'. Now imagine that you are sitting down to watch this show only to discover that it focuses exclusively on the trauma that occurs in an all-white poverty-stricken neighbourhood. And that all of its six episodes feature an entirely white cast. The one and only Black character that shows up for a total of perhaps 8 seconds during the show is never even allowed to speak. This would confuse and enrage you, especially if you have direct experience with racial injustice.

In truth, the series never once mentions statelessness except in its title. It does next to nothing to clarify the term’s definition. In fact, it further deepens the false and confusing notion that statelessness is some obscure subset of the refugee or a displaced person's status. Statelessness is, in fact, a unique experience with profound implications, and it demands interrogation of this series' misuse of the term.

As stateless persons, we are, by definition, human beings who are NOT recognized as citizens of any country on earth. In the U.S. our struggle is a continuous uphill battle. This is largely due to a near total lack of public awareness around the issue not only among the legal and advocacy circles, but in the immigrant community itself. Most human beings belong to some nation, or a country — somewhere. We, the stateless, hold no such privilege. We have no citizenship in any country, and there is no embassy or a consulate to turn to for help. We have been stripped of our basic human right to a nationality which serves as a gateway to most other freedoms. I, for example, have been separated from my family for over 26 years, and am unable to even deport myself due to the fact that no country considers me its citizen, including the country of my birth.

Some of us, like the members of the Rohingya community —  are both stateless and refugees — but that is not always the case. This is an important distinction, as the overwhelming majority of the global refugee community are NOT stateless. Our plight differs from that of the refugees in fundamental ways, especially  in the context of the U.S. Immigration law. While the U.S. legal system offers a pathway to asylum for the refugees, as fragile as that path is, it is still a measure of protection and hope.  Nothing of the sort has been established for the stateless. We are invisible, voiceless, and completely unprotected, and at the same time unable to leave to seek protections elsewhere in the world. If detained, we can become what is known as "lifers" — stuck in detention indefinitely, since there is nowhere to deport us to.

In the series, an elderly man is occasionally shown sitting alone in the detention center's court yard with his suitcase. He is the ONLY character who we identified as potentially stateless. "He has been here for 7 years, because no country would claim him," another detainee summarizes the man’s plight in one sentence. This solitary character's screen time adds up to no more than 10 seconds over the course of the entire show. The gut-wrenching reality of hopelessness and invisibility while waiting to claim our basic human right to belong somewhere on this earth is reduced to a fraction of a token.

While 'Stateless' fails in an eviscerating way to live up to its title, it does succeed as an important, and potentially impactful series. The viewer's attention is sharply drawn to the traumatic experience of refugees and asylum seekers, and the abusive, dehumanizing nature of the immigration detention system. This, however, is not accomplished by means of the tokenistic, cursory glance given to the stories of the actual refugees featured in the series. Sofie, the lead character, is a white German-Australian. A victim of rape, emotional abuse, and mental illness, she is on the run, and ends up unlawfully detained in an Australian immigration detention center. As Sofie unravels in her desperation to attain some sense of belonging, and is forcefully, albeit temporarily suspended in a state of liminality, she becomes a bridge between two worlds. She allows a momentary, clear glimpse into a maddening territory invisible to an average citizen whose right to belong on this earth has never been questioned.

A territory which we, the stateless, call home.

This blog was first published on Medium. 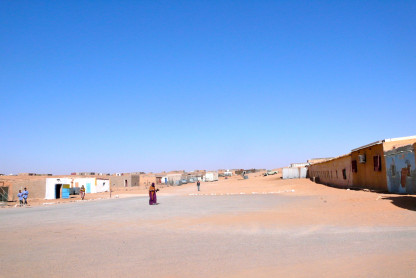