There are many stateless people living in Poland. They have no chance of a normal life, they cannot access higher education or even rent an apartment. Did you know about this? I didn’t. Now that I do, I would like to ask you to make Poland sign the Convention Relating to the Status of Stateless Persons.

This is one of the messages from a postcard to the country’s President. It was written by a 15-year old Polish student as part of our #StatelessKids campaign outreach work. Perhaps it sounds naive, but in truth this short message makes a deeply profound point: if you are unaware that someone’s rights are being abused, you cannot be held responsible for doing nothing, but the moment you learn about it, it becomes your moral responsibility to speak up and act.

From this perspective, statelessness is an exceptionally tricky form of human rights violation. Not only does it deprive the individual of equal enjoyment of state’s protection, but it also pushes the individual into a state of legal and social limbo; making everyone else around believe that stateless people aren’t real. Because if they were, the society would know about them, schools would teach about their predicament, the media would publish news about their plight and most importantly the government would do something to help them, right? 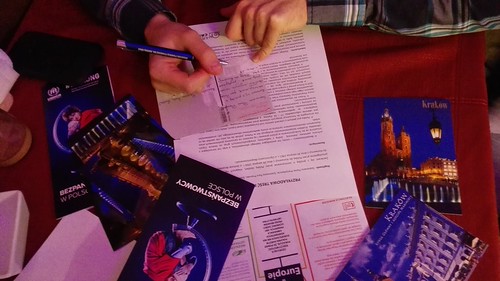 At the Halina Niec Legal Aid Center (HNLAC), educating the public and campaigning are seen as necessary supplementary activities to other work focused on advancing human rights. This is based on an understanding that civil society organisations cannot truly fulfill their mission once they become ideologically detached from society. In other words, one can only achieve meaningful and lasting change in law, practice and social attitudes, if such a pursuit is validated by visible support from within society. Admittedly, striking a balance between the bold human rights principles, and the prevailingly negative attitudes of Poles towards refugees and migrants, might seem like an impossible task. But as much as human rights advocates might hate this friction between ideals and reality, they cannot simply ignore it.

The HNLAC has been involved in research, legal aid and campaigning on statelessness in Poland for several years. Still, as 2016 is coming to an end, even if some undeniable progress has been made, it still very much remains a hidden issue and the average person on the street would have no idea about who the stateless are. Stateless people have no face and no voice; they are still invisible and so it remains difficult to get people to speak up for their rights.

This is precisely why NGOs working with stateless people (and refugees) should now more than ever attach greater importance to their role as educators, and focus on building broader support for their work. They should make people understand what their fight is about before asking them for help. This assumption led the HNLAC to try out several different ways of publicising the #StatelessKids campaign on a national level. Some of them worked surprisingly well while others inevitably failed, but all served as a useful lesson for future endeavours.

Of course campaigning is not about making people feel guilty or even frustrated about their lack of knowledge. It works best if you persuade them that they can do something, that their actions are meaningful and have the power to affect change; change that has real impact on people.

Throughout the project the HNLAC carried out campaign activities primarily via social media platforms: Facebook, Twitter, YouTube and Instagram. We regularly provided information on the situation of stateless children in Europe, used simple infographics, short facts, key messages. Social media activities were also centered around the promotion of the #StatelessKids petition and a more general call for action.

In order to promote our campaign event on 20 November, the HNLAC’s team created a video which was distributed through social media. Altogether several dozens of pieces of information on the campaign were posted in various social media channels, press notes were sent out to media outlets, shared with other NGOs and public institutions.

So did it work? The answer is not a straightforward one. Did the campaign change the anti-migrant and generally xenophobic attitudes in Poland? No. Did it make the Polish state sign the statelessness conventions? No. But it achieved one, very important thing – it managed to make some young Poles sympathize with stateless kids – children and teenagers just like them, only less privileged in their status and deprived of their rights. It is a small victory, one might argue, but a victory none the less, this campaign gave the stateless kids a voice and a face real enough for a teenager to send a postcard to his country’s President asking him to act.