“When others are walking, I have to run” – Why more needs to be done to address statelessness in Sweden

The Church of Sweden is highly invested in the work of the rights of people on the move, including those who are considered stateless. We meet and work with people who are stateless on local, national and international levels. On a local level the majority of the parishes in the Church of Sweden are involved in projects together with newcomers, among them stateless persons. On a national level, Church of Sweden advocates for protection of the rights of refugees and migrants, including those who are stateless – all within the spirit of fostering a more humane, welcoming, and socially cohesive Europe.

By earlier this month hosting a seminar at the Swedish Forum for Human Rights – Scandinavia’s largest annual human rights forum – we wanted to contribute to a better understanding of the realities of people facing statelessness, and explore ways to tackle the great difficulties – and ultimately to put an end to statelessness. 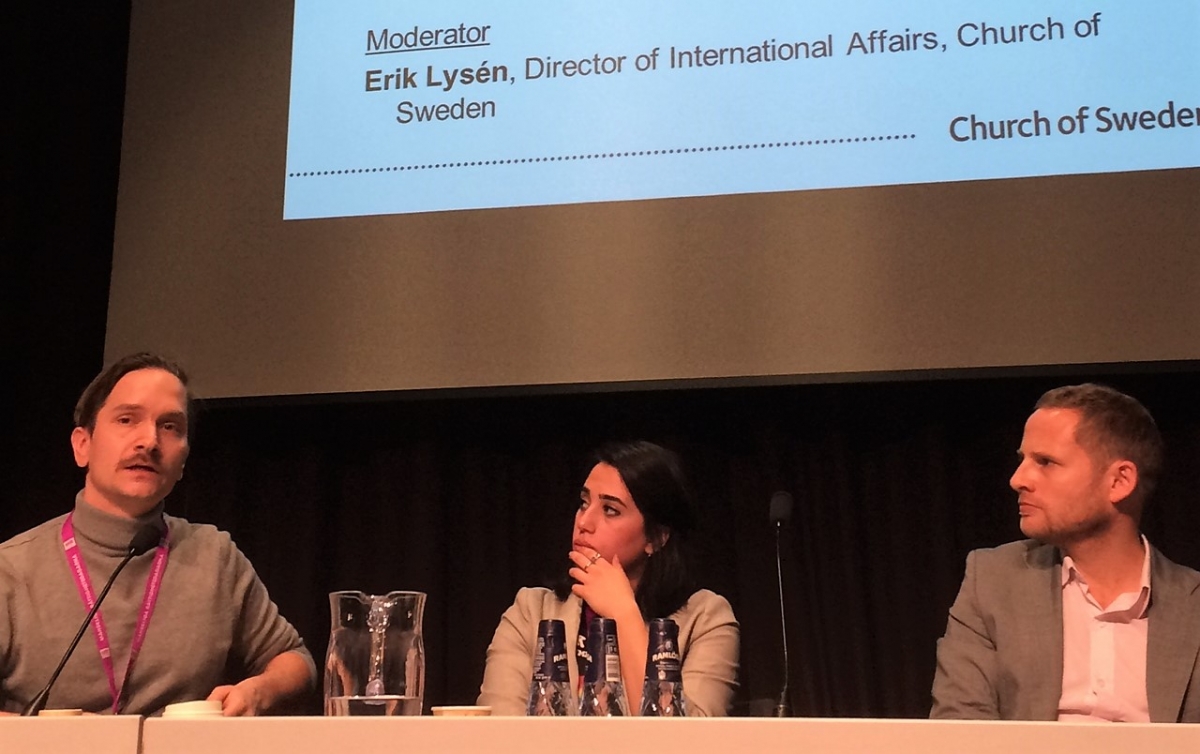 One of the speakers at the seminar were Lynn al-Khatib, a student and activist from Syria with Palestinian heritage, who has been living in a situation of limbo since she came to Sweden four years ago. Lynn inherited her statelessness from her Palestinian father and was unable to receive her mother’s Lebanese nationality due to gender discriminatory nationality laws. After running away from the war in Syria in 2012, Lynn and her family sought temporary refuge in Lebanon. However, as a Palestinian she knew she wouldn’t have a chance to obtain Lebanese citizenship, and so the journey continued to Sweden.

Lynn gave a powerful account of her experiences of statelessness in Syria, Lebanon and now Sweden. Being deprived a nationality and many of the basic human rights that are attached to citizenship, Lynn says she always had to compensate for her lack of given opportunities; “When others are walking, I have to run”. She poignantly described how even as a small child she understood what it meant to be stateless and how from an early age this fostered in her a burning ambition to acquire a nationality, something that most people take for granted. Lynn is determined to advocate for the rights of all stateless people around the world – at least 10 million according to UNHCR – and says that “I will not let my statelessness get to me; I’ll get to it first”.

Also speaking on the panel was Chris Nash, Director of the European Network on Statelessness, who, among many things, emphasized the need to improve identification procedures so that stateless people receive in practice the protection they are owed under international law. He also presented ENS’s #StatelessKids campaign, including to describe how officials need more training to be able to identify cases of stateless children and so that safeguards to prevent this are not missed.

UNHCR participated through their statelessness consultant Paavo Savolainen who described how the UN agency is advocating for an end to statelessness by 2024 through their #iBelong campaign - that globally has already resulted in 160,000 stateless persons receiving a nationality since the start of the campaign in 2014. He described the existing legal framework that is supposed to protect stateless persons and prevent new cases of statelessness arising, yet is far from being fully implemented across the world. Sweden for example, has still not fully harmonized its domestic law with the 1954 and 1961 UN Conventions on statelessness although it was one of the first countries to ratify these important instruments.

For example, and as previously reported on this blog, Sweden has failed to introduce a dedicated statelessness determination procedure to enable it to identify and provide a regularization route for stateless people stuck in limbo such as Lynn. This is one of many yet to be implemented recommendations from a 2016 UNHCR mapping study. Other gaps that need filling include the need for improved guidance for decision-makers, incorporating the definition of a stateless person in domestic law, improved data collection and recording in databases of the Swedish Migration Agency and the Swedish Tax Authority, and ensuring full safeguards for otherwise stateless children born on the territory – including by removing the current requirement that they must first have a permanent residence permit. Recent commentators, including on this blog, have also voiced concern about the impact of the temporary asylum laws which could particularly impact on stateless refugees and leave them in limbo for longer periods or even indefinitely.

It is also important to recall that at a Ministerial Level Meeting organized by UNHCR in Geneva in 2011, Sweden pledged to address statelessness through its external relations policy. However, to date little concrete action has been taken by Sweden to implement this pledge. Clearly Sweden and other EU countries can play an important role in encouraging states in other regions to for example improve birth registration or strengthen safeguards in nationality laws. However, to credibly do so EU countries must first ensure that they are fully implementing their own international obligations towards stateless persons at the domestic level

The panel came up with a number of ideas for collective action, emphasizing the need for awareness raising and building capacity to deal with statelessness within relevant authorities. Decision makers also need to be aware that there are ways to decrease the number of stateless persons – starting by properly implementing existing obligation under international law.

The Church of Sweden is part of a faith community that believes in a God who stands in solidarity with those who are silenced or living in vulnerable situations. Every human being is sacred and human dignity cannot be violated. Therefore, the Church of Sweden undoubtedly has a role to play and a responsibility to act when it comes to the protection of stateless persons; not the least by highlighting the issue and raising awareness within our large network of churches, faith based organizations and other civil society actors. As we encounter people who face statelessness on local, national and global levels, we have a responsibility to address and tackle statelessness both practically in our face-to-face encounters and on a global policy level as we strive to hold decision makers accountable to the commitments we have made by ratifying conventions such as the 1954 and 1961 UN Conventions on statelessness.