On 26th January, Iceland acceded to the 1954 Convention Relating to the Status of Stateless Persons and the 1961 Convention on the Reduction of Statelessness. Whilst this is an important step that must be celebrated, it also provides an opportunity to reflect on what still needs to be done to protect over half a million people who continue to live in Europe without a nationality.

It is always a time to pause for celebration when new countries step up to embrace their international obligations towards stateless people. Last month Iceland acceded to both UN Statelessness Conventions, joining sixteen other European countries who have done so in the past decade. However, with more than half a million people continuing to live in Europe without a nationality, it is also a moment to critically assess what still needs to be done. Whilst statelessness occurs for a variety of reasons, it is essential that Europe addresses its causes, from legal gaps, to forced migration, discrimination, and the exclusion of minorities, as well as the ongoing marginalisation and human rights violations experienced by stateless people.

Accession to international instruments is always welcome, but only ever a first step. Too many countries that acceded to the 1954 Convention many years, or even decades ago, have since been paying lip service to their obligations by failing to introduce effective laws and procedures to identify and protect stateless people. For example, we know that proposals to introduce a statelessness determination procedure (SDP) as well as reform its nationality law to prevent childhood statelessness have been before the Dutch Parliament for several years without having been adopted. Following elections next month, it is essential that the new Dutch government addresses this. Having finally acceded to the 1954 Statelessness Convention in 2019, Malta must now quickly establish an SDP in order to be able to implement its obligations towards stateless people in practice. Austria, Czech Republic, Germany, Ireland, Norway, Portugal and Switzerland, among others, have also all acceded to the 1954 Convention but still lack established dedicated procedures to identify and determine statelessness. The same applies to signatories to the 1961 Statelessness Convention who must translate their obligations into concrete law reform necessary to prevent and reduce statelessness. North Macedonia is an example of a country which was recently rightly applauded for announcing its accession to the convention but must now translate this into effective domestic law reform.

Against this backdrop, it’s important also to acknowledge where some welcome progress has been made over the last decade: nine countries have reformed national laws to grant protection to stateless people or prevent statelessness; and some political commitments have been made by the EU and Council of Europe. However, much more needs to be done and quickly if Europe as a region is to get even close to fulfilling the ambitious target set by UNHCR’s #IBelong campaign to eradicate statelessness by 2024.

Action from more countries and implementation of existing pledges needed

One way to generate momentum is to prioritise implementation of pledges made at the UNHCR’s High Level Segment on Statelessness in 2019. This saw an impressive total of 252 statelessness-related pledges made by states, including 36 pledges made by 13 European countries. Never have so many states pledged to; accede to the two Statelessness Conventions; enact law reform to prevent statelessness; improve birth registration; or to grant protection to stateless migrants and refugees – all critical given that statelessness is both a cause and a consequence of forced migration.

All these pledges are included within the outcomes of the Global Refugee Forum (GRF) that took place immediately following the High-Level Segment in December 2019. Crucially, two things are required to ensure pledge implementation is effectively monitored and delivered as part of GRF follow-up mechanisms. Firstly, a dedicated thematic stocktaking session on statelessness in the run-up to the planned High-Level Official’s Meeting in December 2021. Secondly, concerted efforts must be made to integrate and mainstream statelessness as part of all GRF monitoring mechanisms and the High-Level Official’s Meeting agenda, and in preparation for the next Global Refugee Forum which will take place in 2023.

In addition to the pledges made, it is equally crucial that action is taken by the many European countries who have not yet stepped forward or pledged action. Three areas must be urgently addressed. First, thousands of children are still being born stateless across Europe. Research ENS published in 2015 found that half of European states have gaps in their laws to prevent this. Since then, only Norway and Albania have introduced reforms. Furthermore, only 12 European states have dedicated statelessness determination procedures (SDPs) to identify who is stateless on their territory and to grant them the rights they are entitled to under the 1954 convention. In the absence of SDPs, many stateless people find themselves in legal limbo with no way to regularise their stay. Finally, many thousands of refugees coming to Europe are without a nationality, and some children born to refugees may be at risk of statelessness, something current asylum law and policy fails to address, often resulting in poor decision making and a failure to protect fundamental rights.

A regional approach is lacking, but opportunities lie ahead

Although state-led initiatives are critically important, they are not by themselves enough to sufficiently turn up the dial on efforts to eradicate statelessness. Much more urgent attention is also required by regional bodies to help drive and coordinate reform. Despite landmark European Council Conclusions on statelessness in 2015, rallying cries from the European Parliament, and Council of Europe initiatives, Europe still lacks a common approach to statelessness akin to regional strategies adopted in the Americas and West Africa. Helpfully, there are some immediate opportunities that can allow the EU and other regional bodies to integrate a stronger focus on statelessness across relevant policy agendas.

The new EU Roma Strategic Framework for Equality, Inclusion and Participation calls on EU member and enlargement states to develop national strategic frameworks to tackle Roma statelessness. Taking an intersectional approach to address the diversity of Roma in Europe, the framework explicitly calls for stateless Roma and those who face barriers to accessing civil documentation to be included in national action plans. The Commission’s guidelines to states on this are clear “end statelessness among Roma by ensuring universal birth registration and access to identity documents, formal statelessness determination procedures and universal access to services”. The Poznan Declaration and EU enlargement process also provide important advocacy windows to eradicate Roma statelessness in the Western Balkans. Similarly, the European Commission’s new Child Rights Strategy has the potential to address statelessness through a variety of cross-cutting measures. There is also a role for the Court of Justice of the European Union in upholding the right to nationality of all children born in Europe so that they in turn can enjoy their right to EU citizenship, such as in the current case of a child born to same-sex parents against Bulgaria.

When it comes to migration, implementation of the EU Pact on Asylum & Migration Pact can and must take account of the fundamental rights of stateless people. It will be incumbent on all actors, including the Portuguese and subsequent Presidencies, to integrate these considerations into the negotiations of the Pact instruments.

Pulling together and maximizing all these opportunities will require concerted action and new advocacy coalitions, including with people directly affected by statelessness. It will also require an ever-closer monitoring of law, policy and practice in order to hold governments to account. ENS will strive to continue to be an effective catalyst for change, mobilising key actors and galvanising action to address statelessness. This year’s 60th anniversary of the 1961 Statelessness Convention presents a pivotal moment and opportunity to re-double efforts to tackle the problem of statelessness. This is afforded even greater urgency given that stateless people are among those most impacted and marginalised by the COVID-19 pandemic. Now is undoubtedly the time to strive for a Europe where everyone is able to enjoy their right to a nationality. 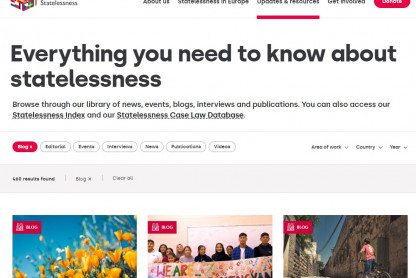 Our blog – 10 years on and changes ahead…

It's been 10 years since we launched our blog. Since then we have published over 450 blogs written by 257 different authors. In total, the blogs have…
8 Sep 2022 / Jan Brulc, European Network on Statelessness