Editorial
Chris Nash, Director and co-founder of the European Network on Statelessness
Share

Last week ENS members, including stateless changemakers and people with lived experience of statelessness convened in Brussels to launch the Stateless Journeys campaign and celebrate our 10th anniversary as a Network. We were joined by high-level representatives from governments and regional institutions, as well as UNHCR and other relevant actors. The event demonstrated the importance of the perspectives of those with lived experience in advocating solutions, and the critical function of civil society networks in helping to facilitate connection with policymakers.

When planning to mark our 10th anniversary we wanted first and foremost to hear from our members and partners who helped get us where we are today.

Founding and working to develop our Network over the last decade has been an intense and hugely inspiring experience which I couldn’t and won’t try to do justice by describing in detail here.

But along the way there have undoubtedly been key pivot points where attitudes, direction and momentum have shifted. One such moment crystalised for me during the launch of our Stateless Journeys campaign at an event in Brussels last week, where we also marked our 10th anniversary.

The Stateless Journeys campaign seeks to build a coalition of actors committed to ensuring full respect for and protection of the rights of stateless refugees. The campaign is co-designed with people with lived experience of statelessness, so developing it has been a hugely rewarding but also time-intensive process in making sure that the views and voices of stateless people are centred.

Although I had an idea what to expect at the campaign launch last Thursday, I wasn’t fully prepared for quite how resounding and impactful it felt watching a panel designed, moderated and comprised almost entirely of stateless changemakers from within our Network (Lynn Khatib, Sirazul Islam, Omar Othman and Aleksandra Semeriak – also joined on stage by Aleksejs Ivashuk). This powerfully brought home to everyone present how important and effective the perspectives of those with lived experience are in advocating solutions. It also made me reflect on how far we have evolved in becoming a much more inclusive and representative network than when we set up back in 2012.

We’ve still got much to learn and improve on in terms of being fully accountable to stateless people, but I‘m incredibly proud of the progress we have made implementing our community engagement strategy since including this as one of our five major goals in our current five-year strategic plan in 2018 – another key pivot moment for us as a Network. Year on year since then we’ve been able to increasingly diversify our membership to include many more stateless people and community-led organisations. Half of our Advisory Committee either have lived experience of statelessness or represent community-led organisations, and the value of that was evident during a meeting of the Committee which took place the day after the launch. Going forwards, one specific challenge to acknowledge is the ongoing critical need to ensure that stateless changemakers are properly resourced and supported to make their contribution.

The voices of Lynn, Sirazul, Ahmed and others feature in a series of dedicated films on our campaign website – key digital outputs which we’ve co-developed to share stateless changemaker’s perspectives with a growing audience of refugee response actors who are positioned to help bring about change. Already during the first panel at our event the impact of this was epitomised by the onstage response of Spain’s Ambassador to the EU Marcos Alonso, who, upon watching Lynn’s film instinctively commented that “it’s an obvious thing but it seems it’s not so obvious”. In other words, his recognition of an unmet albeit ostensibly self-evident need to fix Europe’s statelessness problem. UNHCR’s Assistant High Commissioner for Refugees Gillian Triggs echoed similar sentiments, and there was a powerful contribution from fellow panelist Christiana Bukalo – ENS trustee and co-founder of Statefree, a new stateless-led organisation driving change efforts in Germany.

The challenge now is how to get these voices heard by decision-makers from regional institutions as well as governments across Europe, and to actively engage a growing and diverse coalition of campaign supporters. As a platform, to help us achieve this we’ve developed a campaign statement, already signed by over 75 organisations.

Growing our Network as a platform for change

Last Thursday, watching our anniversary film provided a moment to reflect on what we’ve achieved together over the last ten years. Having so many high-level institutional representatives with us in Brussels was itself testament to how our convening power as a Network has grown through concerted engagement and awareness raising activity since 2012. The opportunity to now utilise this platform and marry it up with our community engagement principles and recently strengthened communications function inspires me with much optimism for the future.

When we set up ENS back in 2012 there were only a handful of organisations working on statelessness. It’s hard not to be struck by how much we’ve grown since our very humble beginnings as a small Steering Committee with just six founding members. Fast forward ten years and we now have a staff team of 10, and over 170 members in 41 countries.

Flagship projects such as our Statelessness Index and our Statelessness Case Law Database not only innovate but have been developed in response to what our members told us they needed to help hold their governments to account. We have undoubtedly helped shine a spotlight on the statelessness issue, which is now higher up policy agendas and much better understood in terms of its relevance to nexus issues such as forced migration, child rights, and anti-discrimination. We’ve seen increased attention by the EU and the Council of Europe, as well as helped secure positive law reform in several countries.

I’m also incredibly proud of the way our members have always shown such great solidarity in coming together to address challenges, most recently evident in our responses to the Covid pandemic and the war in Ukraine. Our recently revamped website embodies our efforts to date - showcasing more than 600 outputs (blogs, research reports, policy papers, legal submissions, interviews, multimedia etc) that we have produced along the way. As a Network, we have also run three pan-regional awareness-raising campaigns, organised over 20 regional roundtables/conferences and (with our members) held over 100 trainings.

Work ahead – the next 10 years

Yet despite this progress, statelessness is still not adequately mainstreamed across key nexus policy agendas, including forced migration. We are determined to change this through our Stateless Journeys campaign. We will continue to engage and innovate as we roll out the campaign over the coming months. Our ethos is always to be ambitious and to continually strive for improvement in our work and the impact we achieve.

In 2023, we will consult on and design our next five-year strategic plan. As a Network, we undoubtedly have the necessary energy, expertise and passion but we need to engage many more partners with our work, as well as find ways to secure resourcing commensurate with our ambition.

It is both inspiring and a great privilege to have worked with so many amazing colleagues, members and partners over the last decade. As we celebrate our anniversary, I want to warmly thank everyone for their support as we seek to redouble our efforts over the next 10 years. And I hope that many more people will join us on the next stage of our journey! 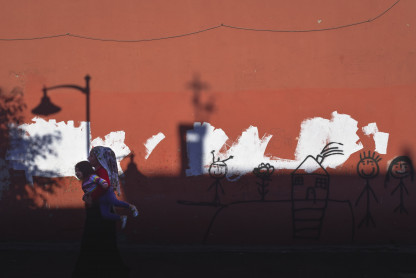 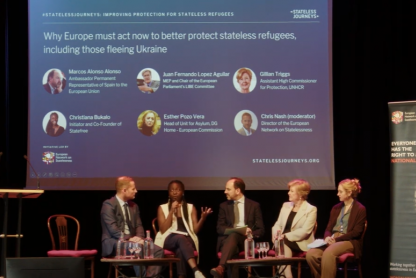 Watch the launch of our #StatelessJourneys campaign and panel discussions on how Europe can improve protection for stateless refugees. You can also…
9 Nov 2022 / video