ENS was able to catch up with United Nations Assistant High Commissioner for Refugees, Gillian Triggs. We asked her about the recent external evaluation of UNHCR’s statelessness work, which was commissioned to generate insight into UNHCR’s work to support States to end statelessness, with a particular focus on actions and advocacy efforts since 2014.

UNHCR decided to commission this Evaluation to generate evidence and insights regarding UNHCR’s work to support States to end statelessness. It was timed to inform potential adjustments to the way in which UNHCR supports the final three years of implementation of the Global Action Plan to End Statelessness (GAP), which is the guiding framework underpinning the #IBelong Campaign to End Statelessness by 2024.  The Evaluation covered the period of 2001 to 2020 with a particular focus on actions and advocacy efforts by UNHCR and partners to support implementation of the GAP since its launch in 2014.

The Evaluation exercise was valuable as it very much confirmed what we already knew or suspected. First, that over the past 20 years, UNHCR and its partners have positively impacted the lives of many stateless people and those at risk of statelessness – this is demonstrated by the fact that more than 400,000 people have acquired nationality or had nationality confirmed since the IBelong Campaign was launched. Secondly that by working together, UNHCR and its partners have successfully raised awareness of statelessness and begun to build the necessary political will and capacity to prevent and resolve statelessness. Thirdly, that the #IBelong Campaign and the GAP have provided a useful framework for guiding States, UNHCR and partners in efforts to address statelessness – for example, regional declarations and country action plans that are based on the GAP have sprung up in almost all parts of the world. Fourthly, that global diplomatic events, such as the 2011 Ministerial Intergovernmental Event and the 2019 High-level Segment on Statelessness have inspired momentum and yielded hundreds of concrete pledges which secure the basis for future action on statelessness.

This being said, the Evaluation also found that despite these successes, the ambitions of the #IBelong Campaign and targets set within the GAP have proven to be highly aspirational and are unlikely to be achieved by 2024. The challenges of statelessness will continue to remain beyond the lifetime of the Campaign. Critically, although tools and resources have been developed to support UNHCR to plan better to address statelessness, investment in institutional capacity (in terms of budgets, staffing, knowledge and levels of accountability) has not increased to the extent needed to support the goal of ending statelessness – a long-term and complex undertaking, which is highly dependant on political will and susceptible to setbacks. In short, a redoubling of efforts across the board is required within UNHCR for the agency to more effectively execute its statelessness mandate to identify and protect stateless persons and to prevent and reduce statelessness.

Yes, this is arguably one of the most ambitious and resource-intensive recommendations of the Evaluation, which follows from one of the key findings that “UNHCR cannot act alone to end statelessness, [but that] UNHCR can however devote renewed energy, linked to a whole of society approach, to engage and mobilize stateless people and actors from all sectors of society, at global, regional, national levels.”

UNHCR’s Management Response to Recommendation 4 requires the Agency to “ [build] on the work of the Interagency Working Group on Statelessness, the Guidance Note of the Secretary General: The United Nations and Statelessness, November 2018, and the Common Agenda Report, build a multi-stakeholder UN-led Coalition or Alliance on statelessness over the course of the remaining years of the #IBelong Campaign, to help carry forward the statelessness agenda post-2024.”

Accordingly, UNHCR has decided to implement Recommendation 4 in the context of its lead responsibility for implementing the recommendation to “end statelessness” found in the UN Secretary General’s “Our Common Agenda” report: “To ensure that everyone is seen and recognized, measures to prove legal identity (target 16.9 of the Sustainable Development Goals) and end statelessness, including by closing legal loopholes, and disaggregating data by age, gender and diversity are urged.”

To establish this Alliance, UNHCR will soon launch an inclusive and consultative process with all relevant stakeholders at the global, regional and national levels, including stateless activists. Elements of this process will include a survey to gather views on a range of issues pertaining to the establishment, coordination and engagement modalities of such an Alliance; the establishment of a representative Alliance Taskforce to take forward activities associated with establishing the Alliance; and a series of consultations with relevant stakeholder groups to discuss the purpose, strategy and workplan of the Alliance. It is hoped that the Alliance could be launched at the Summit for the Future in September 2023, a key event in the follow-up to the “Our Common Agenda” Report.

UNHCR is taking the Evaluation, and the Management Response to it seriously, and there is an Agency-wide understanding that a “step change” is needed to elevate and resource this part of UNHCR’s mandate. Therefore, the High Commissioner has also committed to  redouble efforts on statelessness as one of UNHCR’s 8 focus areas for 2022 – 2026, so that the objectives of the #IBelong Campaign are best pursued. This is very much to signal the need to increase prioritisation of statelessness as we embark on the final, and arguably most critical, three years of the #IBelong Campaign.

The Evaluation has been widely disseminated within the Agency and all of UNHCR’s senior managers are well-aware of the key findings and recommendations. They were also involved in developing UNHCR’s management response to the Evaluation so this engagement with the process has itself led to a heightened level of awareness about the need to prioritize statelessness when it comes to resourcing considerations. UNHCR’s Management Response sets out a number of concrete ways in which statelessness will continue to occupy an elevated position in the decisions taken by UNHCR’s senior leadership, which includes the Senior Executive Team, Divisional and Bureau Directors. For example, the Management Response to Recommendation 1, sets out that amongst other things, at least two Senior Management Committee meetings annually will be devoted to statelessness, at which the High Commissioner will reiterate expectations to Divisional and Bureaux Directors to assess progress on prioritisation.

One of the Evaluation’s most important findings is that “ [UNHCR] Country Representatives play the most critical roles of all, as the face of UNHCR with national governments and the most influential decision-makers regarding whether an operation will prioritize statelessness work.” It will therefore be at the country level that the transformative shift in prioritising our statelessness mandate will be most critical, not least because this is where our work can have the greatest and most direct impact to address statelessness. To support this, elements of the Management Response are in the process of being implemented, including increasing the knowledge and capacity of UNHCR Country Representatives to address statelessness, and increasing the visibility of the issue by including it on the agenda of Regional Representatives meetings.

In my opinion, the establishment of regional civil society networks, such as ENS has been one of the most important developments in the statelessness arena over the past 10 years. This is because such networks play such a critical role in connecting and coordinating a wide range of NGO actors, many of whom are led by or working directly with stateless communities whose involvement in identifying and supporting solutions to their situation is imperative.

Through the Evaluation, and Recommendation 4 in particular, I think there is a true opportunity to give real meaning to ‘a whole of society’ approach to addressing statelessness. What this means concretely is for all actors, including UNHCR, to come to the drawing board as equals when it comes to thinking about how to create an effective global movement to end statelessness.

Sustaining and strengthening the collaboration between UNHCR and civil society will require increased opportunities for meaningful discussion and debate, as well as an improved understanding of the complementary roles that different stakeholders can play to tackle an issue that can be politically sensitive. It will also require UNHCR to advocate, where it can, for resources to be directed to the civil society sector to carry out a wider range of activities in a more sustainable and impactful manner.

From the vantage point of my position as Assistant High Commissioner for Protection at UNHCR, I am often dealing with situations of worsening conflict or rigid geopolitical interests. The same can be said of course for many statelessness situations, which despite efforts by the international community sadly remain intractable.

But, almost on a weekly basis I also hear or see something positive and concrete that shows that eradicating statelessness definitely is within the realms of true possibility – whether it is the fact that the Philippines just adopted the Foundling Recognition and Protection Act 2022, a formerly stateless tribe in Kenya gained an audience with the President and was subsequently granted nationality and documentation to prove it, or Kyrgyzstan announced that it was the first country to achieve zero statelessness.

I continue to be humbled and inspired by the fortitude and courage shown by stateless people facing often insurmountable obstacles to just live a simple, normal and happy life. Recently I had the opportunity to meet with a group of stateless activists and was impressed with strategic coordination and collective planning that was evidently taking place, but also the sense of energy and direction – that there was a sense that this is a problem that can and must be solved. Direct engagement with stateless-led organisations, including at the policy and planning levels of our work, is also an area in which I believe UNHCR must improve and we are actively looking into ways in which this can happen.

This is the news that shows that with the requisite political will, and the work of a small but growing community of dedicated actors, it is possible to put an end to statelessness and the silent suffering that it causes for millions around the world.

Laura Bingham works as a Senior Managing Legal Officer at the Open Society Justice Initiative (OSJI). She leads OSJI’s projects on the right to…
30 Sep 2021 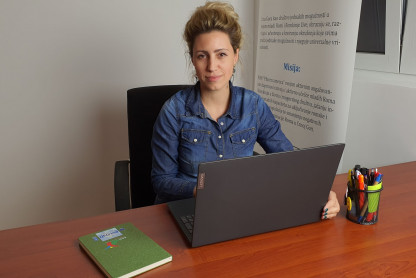 Interview with Nevenka Kapičić, Roma Youth Organisation Walk with us

Nevenka Kapičić is a Project Coordinator at the Roma youth organisation Walk with us - Phiren Amenca. They are based in Podgorica and work with Roma…
30 Jun 2021