Interview: Jean Lambert - "Resolving statelessness is a matter of political choice and it can be done"

Jean Lambert is a former UK Member of the European Parliament. She has been a tireless supporter and advocate for the plight of stateless people in Europe.  She has recently joined ENS’s Board of Trustees. We spoke about the challenges ahead in eradicating statelessness.

You were a leading champion for the rights of stateless people in the European Parliament for a number of years. From childhood statelessness, to stateless refugees and Roma affected by nationality issues, you've helped to raise the issue further up the European agenda. How did you first learn about statelessness and why are you so passionate about the cause?

I have a long-standing interest in asylum and migration policy, which predates my election as an MEP. As a teacher, I remember children who found it difficult to go on trips abroad as they didn’t have the right documentation and children who felt they didn’t really belong anywhere. I remember the expulsion of so many of Asian heritage from Uganda under Idi Amin and wondering about the effect of suddenly having your right to live in the country you have called home ripped away from you and losing that identity in a legal sense as well.  In the EP, I was able to support the work of ENS , UNHCR and civil society groups across a range of issues connecting with statelessness, such as Roma rights, children in detention and the rights of  undocumented migrants. In 2014, I hosted the first ENS campaign event in the EP and worked to get the EP study on statelessness approved. As an MEP, I had close contact with other groups affected – including the stateless  whether expelled from their country of birth or not recognised within it, and also within the EU itself. I consider statelessness to be a deep injustice, which leaves people vulnerable and which constricts their lives. Resolving it is a matter of political choice and it can be done.

Following the European Parliamentary elections in May and with the new European Parliament now in place how do we make sure that they pick up and build on the previous work done (such as the LIBE Committee study on statelessness and the LIBE and PETI Committee joint hearing on statelessness) so that we continue moving on from discussion and awareness raising to concrete actions?

There has been a bigger turnover of MEPs than usual – some 60% are new to the European Parliament (EP), so there will be a task of finding new allies on the question of statelessness and making them aware of the issues and the work already  done in previous Parliaments. Fortunately, there is some continuity - particularly within the LIBE Committee and within the Children’s Rights cross-party group, both of which had included the issue on their agendas previously, including following awareness-raising work by ENS. On a practical level, I think it could be useful to ask the LIBE Committee to request an update on the Statelessness study commissioned in the last EP, in the light of new commitments made by EU countries since then and particularly at the UNHCR High Level Segment on Statelessness earlier this month. There is also due to be a new Strategy on the Rights of the Child, which gives an opportunity for input on issues such as Member States’ responsibility to put in place effective safeguards to prevent childhood statelessness. Finally an update of the Common European Asylum System (CEAS) will be back on the table opening scope to talk about statelessness which is often overlooked in asylum debates, despite being a very real issue affecting many refugees and migrants in Europe.

When it comes to the new European Commission what do you see are the opportunities ahead to push for a bigger role of the EU in finding a pan-European solution to ending statelessness?

The new Commission has a more complicated internal organisation than some of its predecessors, so I think we need to consider how we can create support within different parts of the Commission to ensure there can be an agreed position. There is obvious scope within the Common European Asylum System to push for statelessness to be considered and addressed – that may need legislative change and it does need strong guidance by UNHCR, the European Asylum Support Office and civil society organisations such as ENS. The implementation of policies and recommendations regarding legislation concerning the determination of the ‘best interests of the child’ in the new Child Rights Strategy give another possibility. However, to join the different strands there is a need for someone in the Commission to take the lead on statelessness and to galvanise and  report to the EP and the European Council on the progress made on the Council Conclusions on Statelessness back in 2015.

Then looking more broadly at the opportunities in the region, it could be useful to continue developing co-operation with the Council of Europe and to consider where their recommendations on statelessness could be used by the European Union as a basis for improved policy and legislation. For example, the European Parliament has become a champion of the Council of Europe’s Istanbul Convention on preventing and combating violence against women and domestic violence and the EU is considering its own possible accession to the Treaty.

Between 2015-2018 almost 100,000 asylum seekers in the EU were recorded as ‘stateless’ or as having ‘unknown nationality’. Many more refugees come from countries such as Syria, Iraq and Somalia where discrimination in nationality laws means that their children born in Europe may be at risk of statelessness. With that in mind and considering that many member states lack safeguards in their nationality laws to prevent children from being born stateless, how do we draw attention to this and what mechanisms can be used to tackle it?

Statelessness is a hidden feature of the forced migration context in Europe and can present challenges for people seeking protection in Europe at the different stages of their journeys. This is something which needs consideration and action both at the national and EU level. ENS’s #StatelessJourneys project has clearly showed major gaps in Europe’s response as well as what is required from key stakeholders involved to adequately address the issue. Linked to that the Statelessness Index can be a useful tool for those doing national advocacy to show that some countries are taking action, while others are clearly lagging behind.

This year also marks the 30th anniversary of the UN Convention on the Rights of the Child, which clearly affirms every child’s right to a nationality. This provides a basis for consideration of its progress and the EP is hosting a conference in November, where different organisations, including ENS will come to discuss how to tackle remaining issues. For other civil society with a national focus then I think that any Parliament with a Committee or cross-party group working on children or women’s rights could and should be interested in the issue and linking up with refugee support organisations could open up the debate and involve those affected to speak directly about the challenges. Committees dealing with asylum and migration also have an obvious interest. There are other organisations who are useful partners. For example, there is the important work being done through the co-operation of organisations working on asylum, migration and child protection through the Initiative for Children in Migration (ICM), which has developed a set of useful resources;  Eurochild – the ‘umbrella’ group at the EU level that brings together NGOs working on child rights –hosted a seminar on the subject of children and migration in the EP earlier this year and the issue of statelessness was raised by a number of speakers, showing how the topic is becoming more important.

What motivated you to join the ENS Board of Trustees, what do you think are some of the biggest achievement we should be celebrating and what are some of the challenges ahead in mobilising support especially among some of the non-traditional allies in the European Parliament where statelessness overlaps with other issues such as women’s rights, LGBTQI and minority rights?

I was really pleased to be asked to join the ENS Board of Trustees because ENS does important and effective work. I wanted to contribute to that and build on what I had been doing as an MEP. I think we should celebrate the excellent work resulting in the Statelessness Index – having the facts in front of you is a powerful tool. As an MEP, whenever you are presented with something like that, you immediately look at your own country and how it compares with others and then you ask yourself how it could do better and what you can do to make that happen? It’s an energiser. The Luxembourg Presidency being willing to push the issue was a major achievement, as was the joint LIBE and PETI Committee hearing in 2017 which came about as a direct result of ENS’s #StatelessKids campaign and petition.

I do think it is possible to work more closely with the FEMM Committee on Women’s Rights and Gender Equality, especially where nationality cannot be passed to children via the mother, and the increased risk of vulnerability to trafficking for those who have no national authority from which they can seek protection. There is likely to be a strong cross-party group again on LGBTQI issues and they could be open to supporting work on statelessness. There are other groups that work on issues overlapping with statelessness, and with the new EP in place now is a good time to do more strategizing on how to reach out and engage with them. The key will be finding a range of advocates amongst MEPs who can approach the issue from different angles.

With the rise of populism and far-right politics driven by anti-immigration rhetoric we saw in the last EU elections, what do you think are some of the biggest challenges ahead for the EU and what keeps you positive?

The change in balance of power in the new EP is worrying: the hard-right is bigger than before and they are much less sympathetic to Roma rights and the rights of asylum seekers and migrants. This means that progressive majorities needed to pass legislation are likely to be more difficult to find. However, there is a clear benefit to resolving statelessness and it is practical to do it within the EU – as some member states are showing. There is also a practical and moral incentive to urge other countries outside the EU to find solutions. The previous EP, for example, was very clear on the responsibility of Myanmar to recognise the citizenship rights of the Rohingya people. I do believe it is possible to continue to make progress – especially when we can link national and international action – and we can do more of that.

Laura Bingham works as a Senior Managing Legal Officer at the Open Society Justice Initiative (OSJI). She leads OSJI’s projects on the right to…
30 Sep 2021 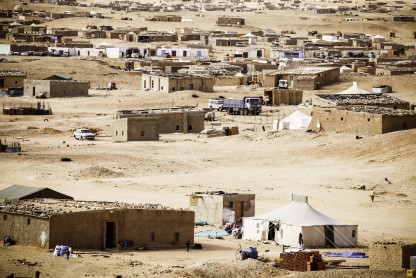